In 1999, like most baby millennials, our parents dictated the family television.

In my Midwestern home, I woke up to Katie Couric and Matt Lauer’s news reports on Today before school. After I returned home, the ritutal continued. As mom prepared dinner, usually a meatloaf, buttery mashed potatoes, and a side of green beans– I’d see dad watching Pat Sajak on the Wheel of Fortune while Vanna White turned random letters in a glittery dress. Chuck Woolery would introduce the iconic “Alex Trebek!” and then there was Regis Philbin’s rhetorical question: “Who Wants To Be A Millionaire?”

And to avoid hearing the arbitrary sentence “go do your homework,” I’d hurry the telephone gossip with Taryn, feed my Tamagotchis, then grab my Lisa Frank folders and spread school over the floor, like Couric’s notes on her morning desk.

My older sister and younger brother also academically busied themselves near the Cable TV—a tactic which managed to work until 9pm, where the night usually ended with some comedy.

All five of us would watch Jay Leno talk to famous guests like Dennis Rodman, Stevie Martin and Melissa Joan Hart. With the occasional brag about his vintage car collection, he’d do so while wearing an all jean ensemble– very Britney.

Like most 90’s kids, our parents’ monopoly over the remote on business days did not bother us because playing outside, day-dreaming about our crushes, or fighting with our siblings was almost always better than TV on weekdays. But don’t get me wrong—there was a line-up of shows under an acronym more famous than D.A.R.E that we could NOT miss, and it could only be viewed on Fridays: T.G.I.F!

I don’t care what the internet says; T.G.I.F was America’s first TV “binge-watched” before the term existed. It was the iconic programming block which aired during prime time on ABC. I’s acronym meant “Thank God It’s Friday,” a sentiment shared by its loyal fans. 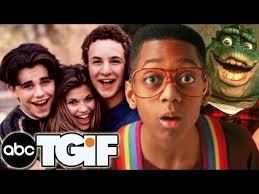 But unlike any Netflix series, this 90’s national treasure was on a timed schedule, which meant we were too. And to find the TV schedule in advance, we had to use the newspaper. That’s right generation Z; there wasn’t even a Guide Menu button on the remote until millennials were 16. If we wanted to see when our favorite series played, we had to manually searched the TV Guide for the Power Rangers and Rugrats, and store it inside our brains instead of on our nonexistent Smartphones.

That’s what I miss about cable TV: the discipline of it all.

Before DVRs and rewind buttons– there were no second chances. Life didn’t pause for us. If you didn’t catch the show, you missed the show. That’s it. If you had to pee during your favorite sitcom, you’d wait until the intermissions or commercials. That’s it!

Now, if you missed the new episode of the Walking Dead, you really didn’t, because the entire series is on TV Demand. Want to catch Trump’s White House briefing on CNN, but you’re at work? Well, it’s already streaming live on YouTube, and its highlights will be clipped and uploaded simultaneously. Now, there’s no such thing as “missing an episode”— if anything, the episode missed you, and will chase you down with random ads anywhere that Wi-Fi exists.

Goodbye to the wholesome 100 or so TV shows and family meals, and hello to billions of virtual content waiting to over-stimulate and make home-cooking too late to do each night. 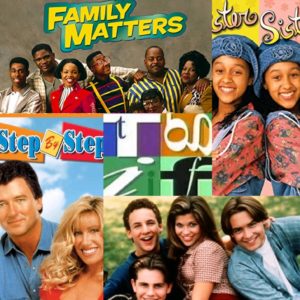 Even though T.G.I.F was a future taste of binge TV, it was controlled within a sharp window of two hours. And it hinged upon effective time-management. If we missed this line-up, we had to suffer the consequences and wait an eternity for the next round… one whole week. Therefore, on Fridays, when 8pm drew near, there was no playing around—literally.

After school, we’d cut the fun with Timmy because there wasn’t a bike ride worth missing some tough-love from Mr. Feenie on Boy Meets World, or Tia and Tamera’s budding relationship on Sister Sister, or the Foster family learning to blend Step by Step, or Steve Urkel’s clumsy havoc on the Winslows’ causing more Family Matters. There were no Carpi-Suns or Bagel Bites more delicious than what these sitcoms gave us once every seven days. We were taught life-lessons through watching the show and through the discipline of watching one show. And what made these episodes valuable was they were only available once a week. They were treated like gems.

But this appreciation of time and TV consumption would soon be ruined by America’s future virtual doom—streaming.

Fast-forward about 20 years later, and I’m now 30 years old. I’m a writer in Brooklyn, but returned home to quarantine with my senior parents in Indiana. I am sleeping in my childhood bedroom which is almost twice the size as my current $1000 adult one. And one thing I’m doing more of, besides snacking, is watching YouTube and Netflix. Now granted, before this stay-at-home order, I was a YouTube connoisseur. And what makes YouTube worse than Netflix is that it’s free. Pre-#StayAtHome, I played videos throughout the day as background noise as I did things like: getting ready, eating breakfast, freelance work, walking to the subway, on the subway, finishing that deadline, waiting for my coffee at THINK, shopping for groceries, cooking dinner, waiting for my friend to stop by, and then falling asleep…so nothing real major. But this quarantine, mixed with my nostalgia of playing outside and using my imagination for fun, has reminded me how I’ve lost my 90s’ knack of watching something and then doing something else without actually watching that something.

Since March, many of us have felt unaccomplished. But if I had a $1 for every time I’ve seen a post about “being bored,” I’d be Judge Judy rich. Are we really bored? Or are we just over-stimulated? According to Psychology Today, overstimulation causes the nervous system to go into overdrive, which causes the mind and body to feel exhausted and drained. It’s not that we don’t have anything to do, it’s that we have too much we can do. So instead of lying on the sofa and doing relaxation, we feel an absence of contentment which makes us want to post something, snap something, share something, or watch something.

So we binge-watch because there’s “nothing better to do,” and quite frankly that’s a lie. If anything, having to stay inside has shown we have a lot of better things to do. We just forgot what they were.

But is it our fault? There’s over billions and billions of videos to watch at our fingertips, and quite literally through our apps: Netflix, Hulu, Showtime, HBO, TV on Demand, Amazon Prime, Facebook, Instagram, Snapchat, TikTok and of course, YouTube. 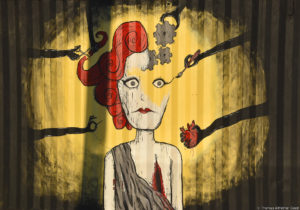 On YouTube alone there are millions channels producing bulks of content viewed over five billion times per day. You don’t have to wait until they “come on,” because they’re always waiting for you. Not only that, but can we talk about some of the garbage on YouTube for a second?

When my parents gave my sister, brother and I temporary reign over the TV, it was because they still had the ultimate control. They purchased the cable package with the additionally parental advisory feature, which censored Beavis and Butthead and other MTV shows. Let’s go a step further; every TV show went through its own rigorous vetting process. There’s the pitch, then the meeting with the corporate higher-ups, then the pilot, then the public response, and then maybe a TV show—of which less than 500 get their shot a year. 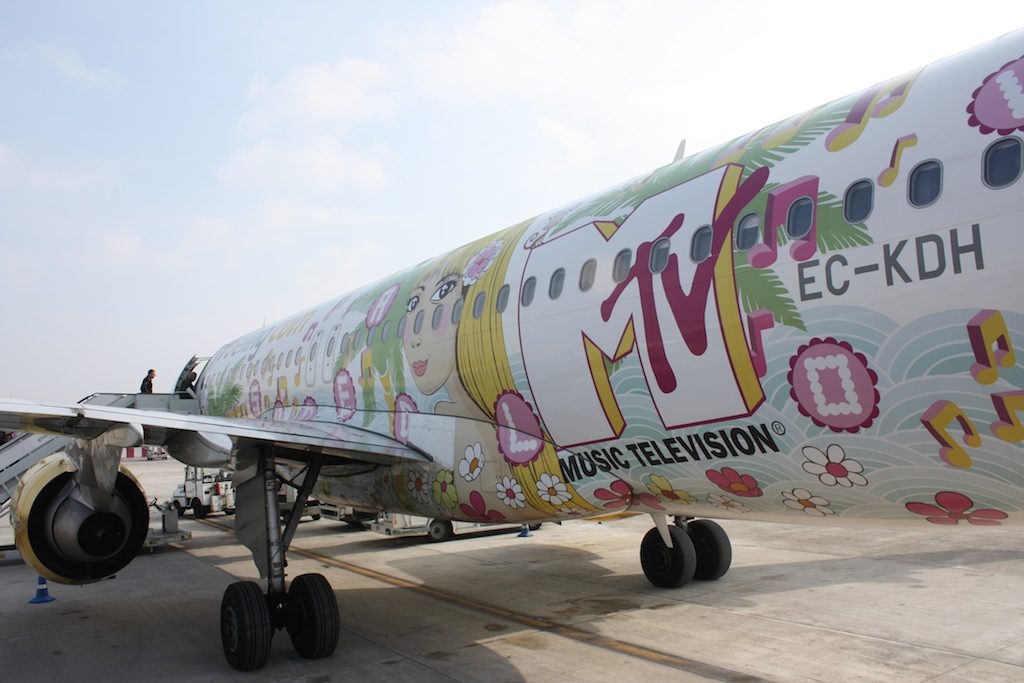 On YouTube, over 31 million people have taken their own shots. There is no pitch or pilot, before these videos are published. If you have an idea and a video recorder, you have a show. And yes, YouTube has its “Terms of Service;” for example, you must be at least thirteen to use the platform. When creating a YouTube account, any child can become a virtual adult by selecting 1999 as their birth-year instead of 2010, given that the platform fails to ask for a parent’s permission slip.

And speaking of school, whether you’re in kindergarten or in college, YouTube has been the nemesis to studying since 2005. These videos don’t only distract students from their final exams, but freelance writers from making deadlines. The hairdresser cannot resist looking over her client’s shoulder at Real House Wives clips, and the young stockbroker may missing the A train again. Sometimes I wish nothing more for my parents to tell me to, “go do your work,” and to beg me to “get off that electronic thing.” Not only does our excessive watching take our concentration, but our beauty sleep, too. 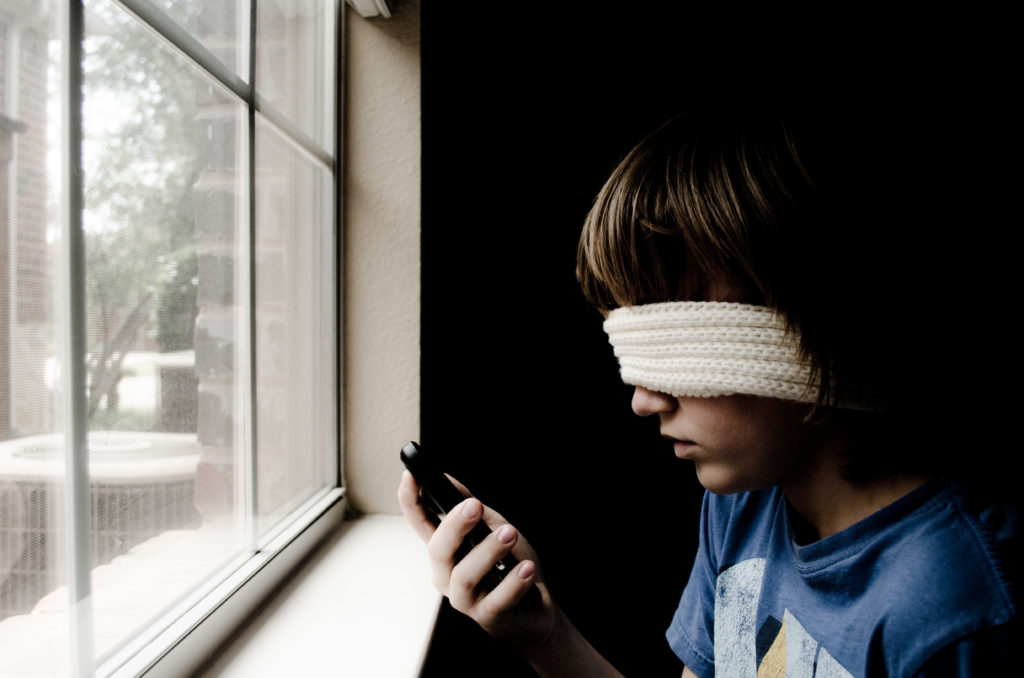 On average, Americans intend to sleep before midnight, but crawl into bed many hours prior to spend an average of 7 hours under their covers not sleeping. And most of this time is spent with our TVs and social media. That’s the same amount of time we slept in the 90s’, and now, since streaming, we’ve lost two hours of shut-eye per night.

I state all this to ultimately say: I still like YouTube. Seriously, like anything or anyone, it has its positives and negatives. It has, nevertheless, assigned us some positive things for us amid this pandemic. Hopefully, however, we’ve discovered other hobbies that can help us not stay glued to our TVs and cell phones, like baking banana bread, cutting our hair, and bonding with our families and friends. 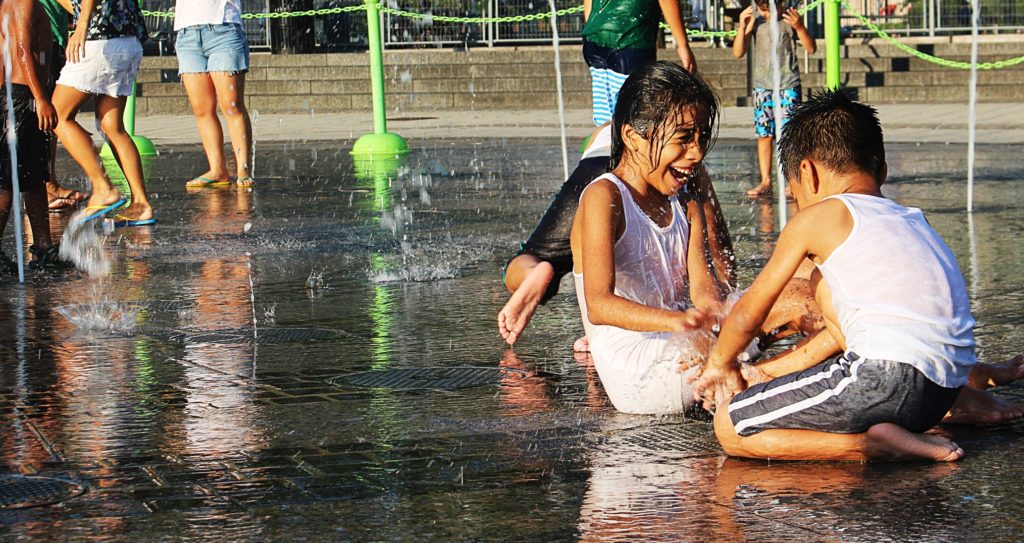 Right now in my neighborhood, it looks like the 90’s again. Families are walking with each other. Kids are riding their bikes. Couples are taking midday strolls., Frankly, it feels like a Wonder Years episode.

It makes me miss the simpler times, and my Tamagotchi, so the first thing I’m going to do when back in New York City is buy a Capri-Sun and go to my rooftop, where I’ll watch the sunset and snap a photo to share later. 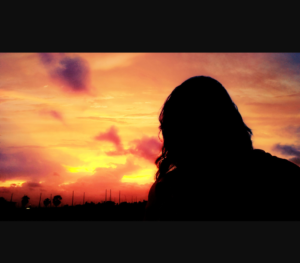 Brittany Talissa King
Brittany Talissa King is a freelance writer and recent graduate from New York University. She received her Master's in Journalism (Cultural Reporting and Criticism). She's passionate about exploring American racial issues through essays and her podcast #AmericanShade (on iTunes). At NYU, she studied under Ta-Nehisi Coates, which broaden her scope on the art of language. She currently lives in Brooklyn and enjoys 90's music, baby yoda memes and fries.
http://@b.talissa

3 thoughts on “T.G.I.F on Cable TV: How Millennials Treated Time in The 90’s”