A new, one-of-a-kind collective arts gallery in Chelsea brings together performance art, music, fashion and visual art to excite all elements of your sensational curiosity.  This sweetest specimen of sequins, graffiti and grit, 3-Squared is taking the NYC art world on edge, one ‘Apocalyptic’ event at a Fashionista’s-Den time. 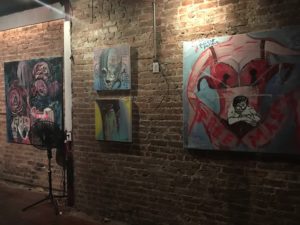 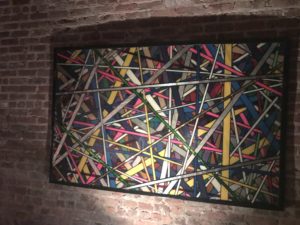 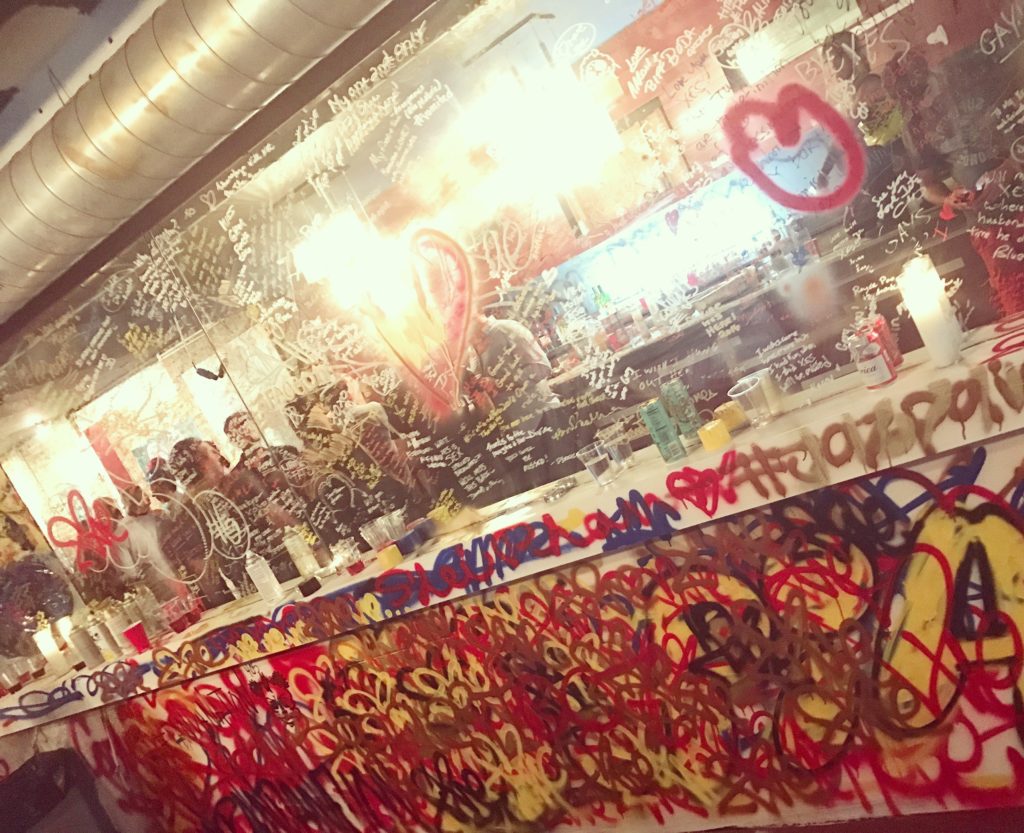 What’s the common thread, theme, purposed of 3 Squared? How did you get the title?

M: We came across this space by chance. We saw it, fell in love with it. Chelsea right now is supremely gentrified, and all the galleries look the same, so we wanted to change things up a little. We wanted to have a communal space that transports viewers to old school New York. We wanted to have somewhere where people could feel comfortable showing their work—a place with an event space element to it–as well.

Why do people ask you two that?

A: Because we have been putting on shows, somehow.

M: We both have background in art curation. So then it makes sense

A: And it’s just been happening in a random way, but I finally got to the point where I said: “Let me get a space!” I approached a friend in Real-Estate, and was like listen: “I see so many retail spaces with just retail in the window, pop up or what not, and I thought- ‘why not approach someone sitting on a commercial space, and take it in for few months…’ They are planning on demolishing this building by the way.

So, you plan on just re-locating 3Squared in the future, not on ever shutting it?

A: Yes, we are already looking at the next iteration, which might be a whole other element to this that we have discussed, which is that: Maybe 3Square is meant to be a moving entity that re-locates to different parts of the city, that helps various artists in different districts, and if it’s close to where you are … (cough).

M: We are looking to kind of invoke Andy Warhol’s Factory from back in the 70’s. Like it, we hope to explore different forms of media. 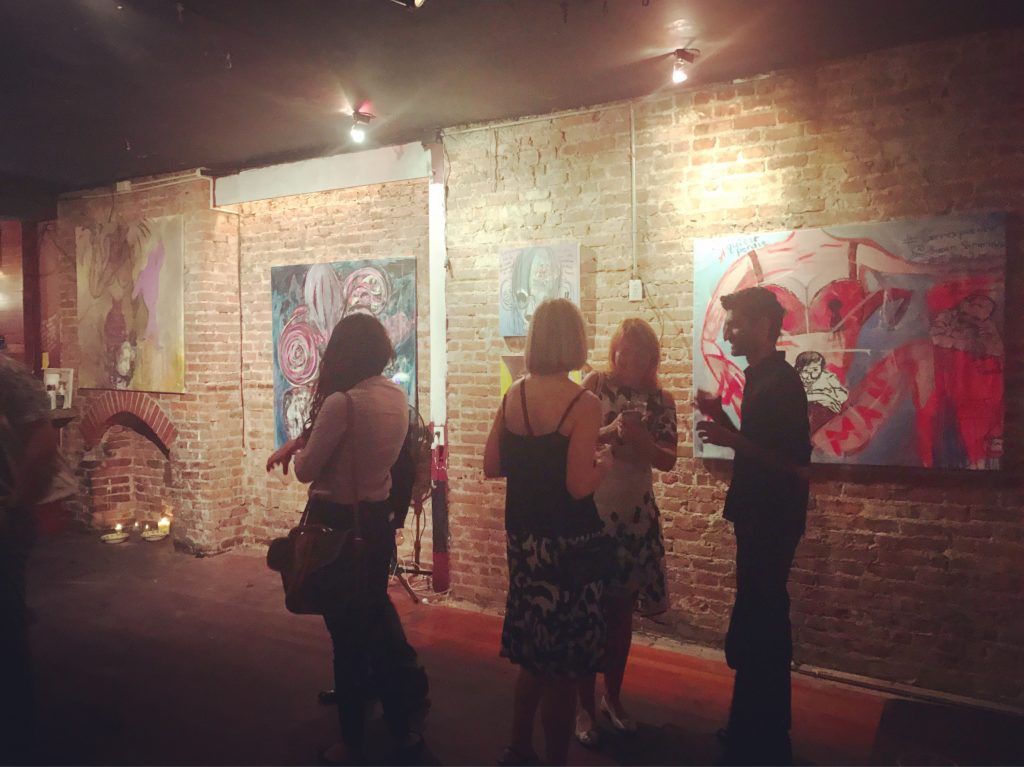 What artists have you exhibited so far?

M: For the opening we had two, we had Russian artist Alisia Bukhvalova, and currently we have NY-based artist Erik Klein. He works primarily with tape, which defines his unique niche. 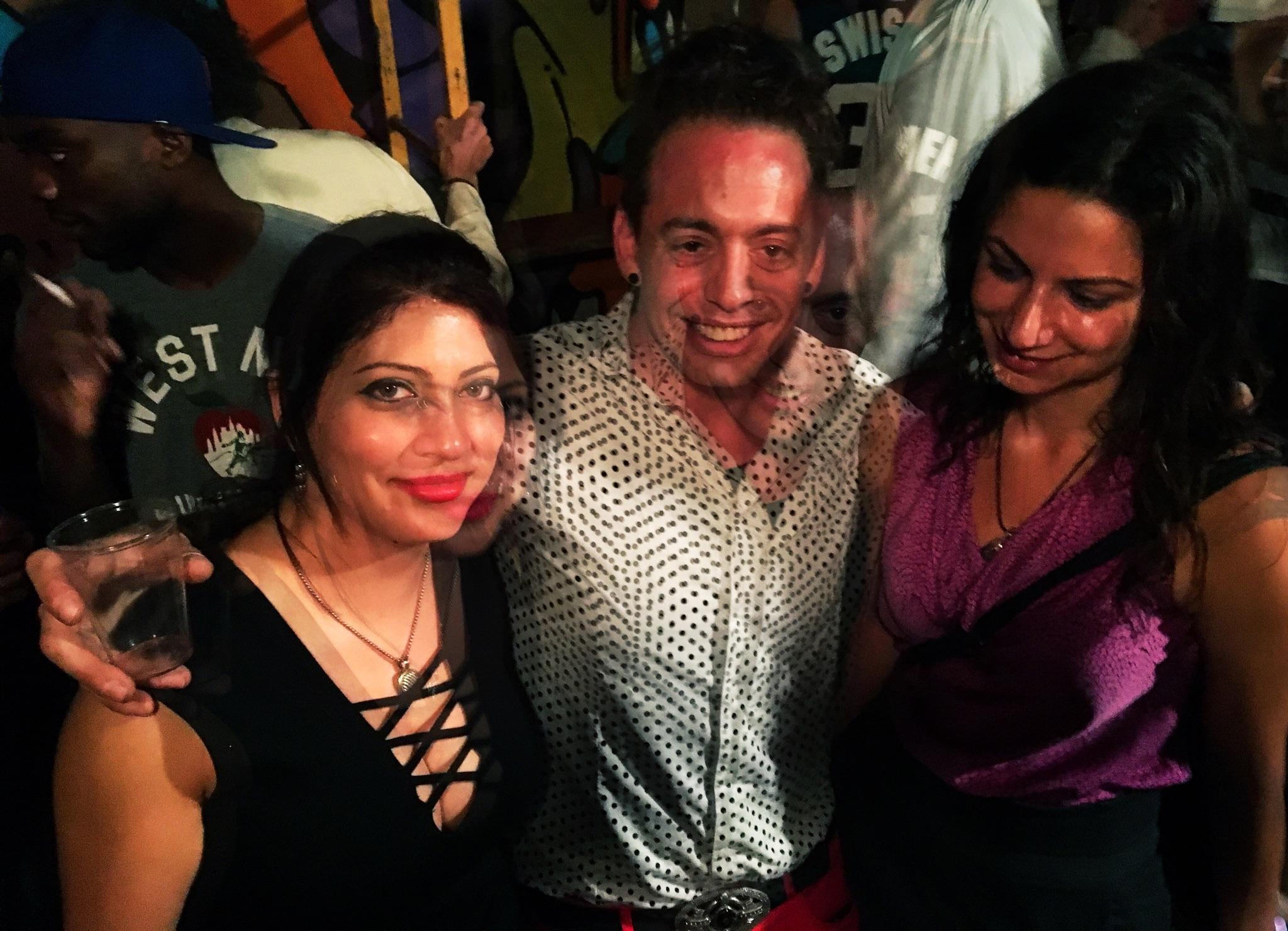 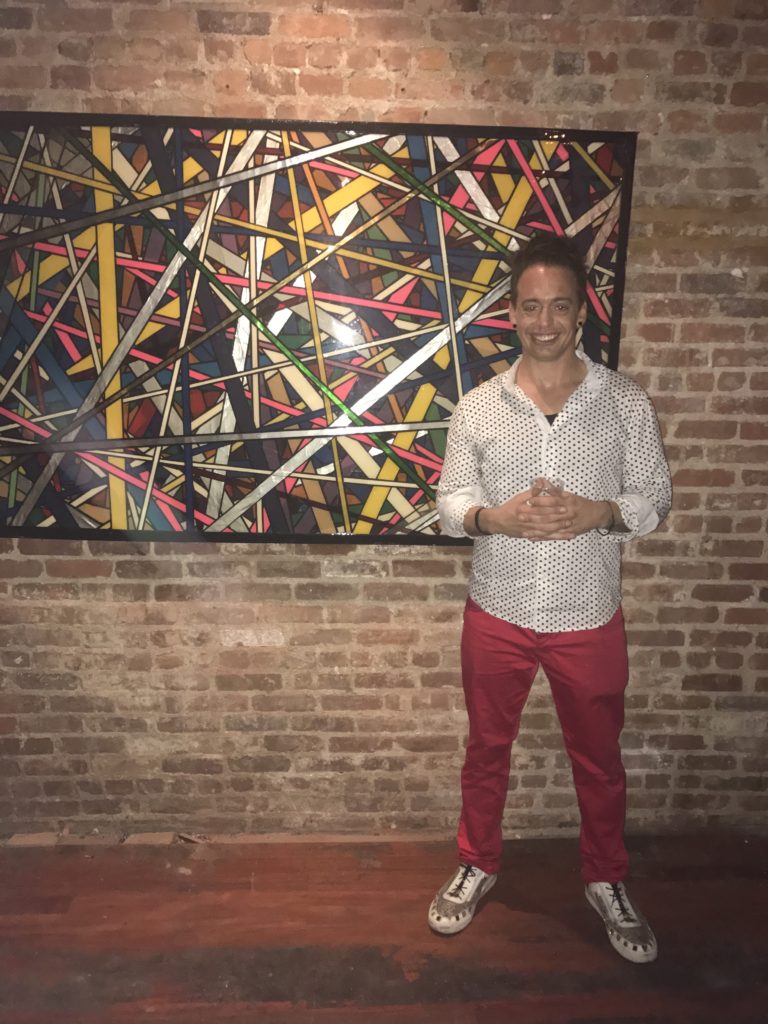 What is the common theme or thread between the two artists?

M: We are going to host thematically relevant shows. We just opened, and we said: ‘Let’s just put ART in. Let’s allow it to exist here, somehow. It’s better to have it here and have it seen than not. We had some artists, who, the day of the opening, so graciously offered their works. ‘We would be so happy to bring our work here, and show them’, and we said: ‘That’s awesome.’ And they brought us the paintings by 6pm that day. Why would we not say yes to that?

How did you get the 3SQUARED title?

A: When we knew we had the space, we were both excited and terrified, and knew we had to choose a name. She actually said “9” one day, and I said, okay— “3Squared” which equals 9!

Well it works, 3—as a triumvirate of different media modes, which seems to align with your multifunctional purpose…I like it. I love the exposed brick too.

Spearheaded by Daniel Scott Kadin, “The Color F” would be taking place on the evening of this interview. “The Color F is an interactive theatrical experience, a dirty romantic comedy, powered by Panda. It’s a fundraiser intended to make this enclave more personal.” – Kadin

A: People give money the idea is the more that we can promote other small theatrical arts and find people involved as well who will fundraise for us—as long as we can keep this space open, it’s not so hard to do that. As long as we can keep people coming in here to do anything, they can do anything, as long as its integral to our vision and idea. Painting, theater, workshops—it’s all possible. I’ve even had someone come in here and talk to me about doing a live painting, with students, etc.

M: I’ve had people contact me about doing film screenings here, as well. So this also points to the versatility aspect.

Wine, nutrition or tasting workshops could also be a possibility… 😉

Are there other galleries that are multi-functional, and doing what 3Squared represents?

A: In Brooklyn, mostly. I have a friend in Bushwick who has a gallery called the 3rd Policeman. She moved from London, and just took a space and put her money into it and is saying ‘Come do Art’. This is the very idea we value for the purpose of creating a community. I opened a high- very high-end and commercial about two years ago with a few friends. It was an utter disaster because went in way too much money involved and debt that ruined the entire organic element. I got out after a year, and this time we are saying thinking:

“Let’s show what we want to show”. If we can do that without losing money—that may be the only thing. Literally, every day that’s what we talk about, is just ‘breaking even’. ‘Let’s cover our costs, let’s break-even… it would be nice if we make some money-sure. But if we can break even and jut have a space that’s existing… then something good will come of it.

That’s money in itself, of course. So what is your background with respect to art and galleries—Marina?

M: My background is in Fashion Journalism, which I did in London, Australia and New York. I also addressed Fashion and Art in my own magazine (  NAME ). I fell into curating for China Town Soup Gallery, and for several galleries in the Lower East Side. I have consequently built up my mailing list, my following—and Akaash approached me about this space and we decided it was the perfect time and perfect space— so we jumped into it.

A: It’s also actually important to note that the reason I approached Marina, who I hadn’t even known for that long—we had just met through a few of her events….

M: We did this Charity at Brian Mellon’s Penthouse.

A: And that was a few months before that happened, when I’d had the opportunity to snag this space. I needed to do it with somebody. It was one of those organic things where we were on each other’s radar at the same time, and I thought: ‘I trust her, I trust Marina.’ That’s SOO important, because I’ve done it—and I’ve done it more than once.

A: It = going into partnership, or business, or shares, or equity or something with a person.  Especially being on the minority side usually, and not the majority owner, you could be bought out, decisions could be have taken over your head, etc. etc. And I thought: ‘I trust her. If we could do this 50/50, we’ll make good decisions together,’ and it’s been really great.

M: We work really well together as a team.

A: There’s always going to be differences in terms of artistic visions, but for the most part there isn’t… things like ‘Here’s the information to my bank account, to see how much we’ve lost or gained.

Are you both working different jobs as well?

M: I am working on the magazine as well as this—all entrepreneurial proceeds.

Nice, Thursday is a great day to have off. Do you want to disclose what you do?

A: It’s not an issue, it’s just that I haven’t figured out how to integrate the two. I actually believe there is a way to so—and that’s my greater (migrator?) purpose. There’s potentially another space I’m looking at—and I’m thinking about bringing both businesses together there. I think that will be a really nice way to merge it all. Again–the root idea in all of this is that Art and Community should be supporting eachother.

You can even do dinners, or potlucks or something…Whole Foods is right there.

A: Yeah. Anything! It’s just so difficult in New York to be an artist. I know so many artists who are incredible, who can’t afford to show. Unless you’re an artist selling for 50K and up, you’re getting nothing by showcasing on 26th and 10th Ave. Those Chelsea galleries’ rent is 50k+ a month.

Wow… minimum? I didn’t realize it was even that much. Wow.

A: Yeah. 100k doesn’t even cover your rent, expenses, your bills, your employee salaries and then the artists get their cuts too. It costs 200K for these galleries to even exists, minimum!! And that’s the same in Soho, and in the Lower East Side. Such few artists are even being given a shot right. It’s really scary to take a shot… and we all know people who really do need a shot.

A: Yes, an opportunity to exhibit.

Great. So you both have experience with selling and brokering the actual sales of art?

M: I’m more on the curation side, but Akaash is better at moving art.

You are the two spearheading this 3Squared then…