“Stevie Wonder is not a blind man; neither was Ray Charles. When you have imagination and can see things in the darkness, you are never blind.” 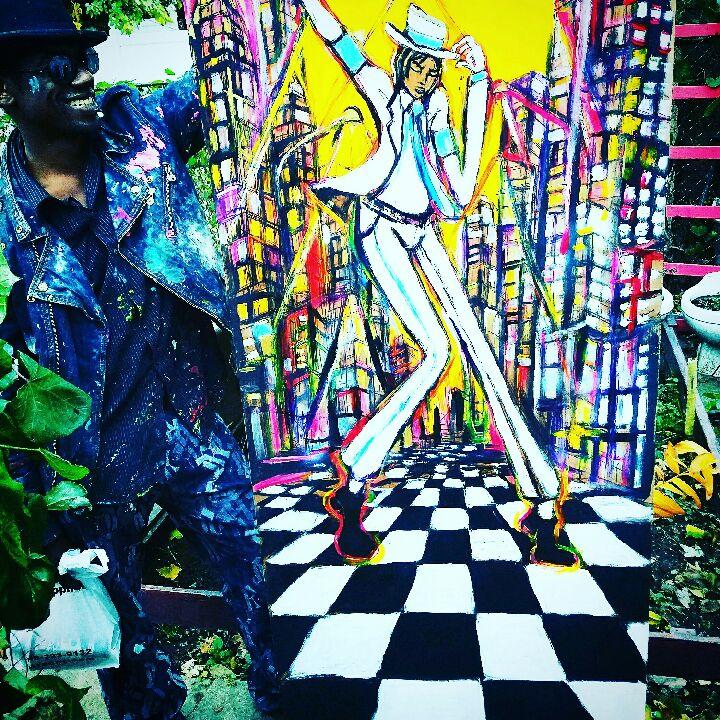 Riz22 Robinson was born in NJ and grew up in Park Slope, Brooklyn. He started running with the TAT CRU, a group of graffiti artists when he was 6, and by 14 he moved onto doors.

“Symbolically—doors are everything. Most of all, they open from both sides. They represent the duality of life. Most of all, they are gateways, entrances, and portals to opportunities. Life is very interdimensional. This is how I view things: ultimately when you win, you lose something.”

Employing recycled material—windows, doors, tabletops, couches— “Nothing is exempt from my grasp.” Like a bee or silkworm, Riz22 takes something which is absolutely nothing, and makes something beautiful. Refrigerator parts, thrown away doors, cans anything that would be considered trash and useless to other people, he assembles into creation. “There’s a lot of life in the wood itself—before you even paint it.” The fond objects become the canvas itself, through a sort of conversion therapy. 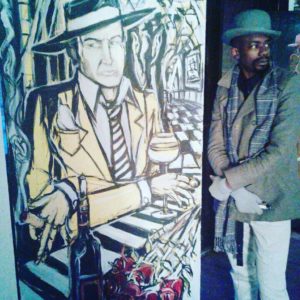 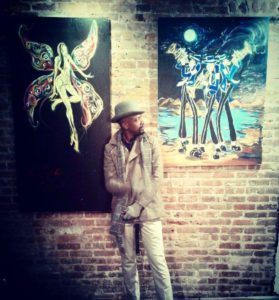 Fascinated with people and skylines, Riz22 captures the motion of life–what makes people tick—their motives. Graceful figures transfix with landscapes, only to sprout out through or in opposition to an urbanely crowded sphere. Exposing the tactility of sea creatures, mermaids, and dancers, limbs braid into checkered backdrops, streamlined by the rough edges of tall, serene buildings.

“I always put eyes in the city. That’s the best door of all.” 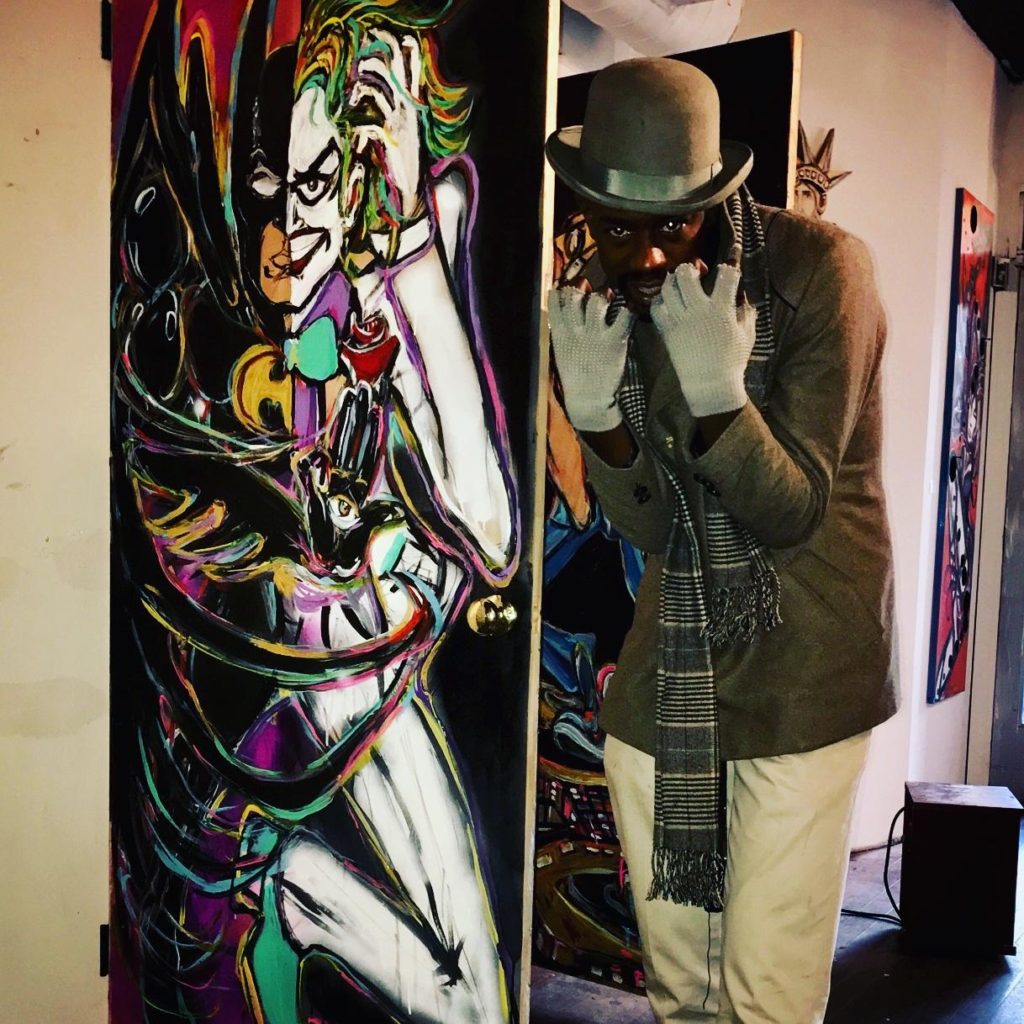 The process, not the result, drives Riz22. Assembling images, checkers, buildings, blunts, peacock fans, turntables, fishnets, brick, thigh highs, and more into geometric latticework that appeals to beyond the physical eye; he emphasizes the ‘how’ a work is made: “There’s too much emphasis on the WHAT out there,” he notes. He launches with fine, impressionistic strokes that end up creating an abstraction. He reveres his predecessors, such as Basquiat and Herring, for using wood as a canvas.

No plan in place, Riz22 works off an initial concept, which is optimized through lyrical improvisation. “I work with the Michelangelo affect at times, where I start with a bunch of loop configurations that like to create itself… I call this the ‘let-go’, in which I carve out an image from the initial abstraction.” He has mastered the craft of spontaneous lyricism through playing Jazz. The 40’s and 50’s too pique his phenomenal transfer of hats and suspenders into the personalized handicraft they once were.

Pivotal to Riz22’s visions are musicians and dancers, whose uncanny frequencies channel the forces we can’t see. Anthropomorphizing palm trees and skylines, who do look like dancing women, the ballerina is his logo: “The dancer represents art as its happening in the moment, or the artist’s process.” Rock n’ roll too peers in through ‘stairways to heaven’—instruments cradled or adorned as a ‘musician’s lover’.

“I love tiptoeing on the borders of fantasy and reality. I think this is why I live – to pull a little bit of fantasy into reality.”

Ty Niko, with whom he collaborates, cuts the found objects into 3-dimensional canvases. He also adds precision to Riz22’s freehand, hence the non-stenciled henna ornamentation. Inspiring Riz22, two-fold, “Art of the future is art that you can interact and live with… like lampshades…a world where you feel you are living inside your mural,” he intones in his newfound-artist’s company. Shower curtains, toothbrushes, dishes, chairs, couches, rugs, pillow cases are all examples of “livable installations” into which he hopes to implant 3-D fantasy: “Imagine taking a voyage through your Monet piece…” they utter—in harmony. 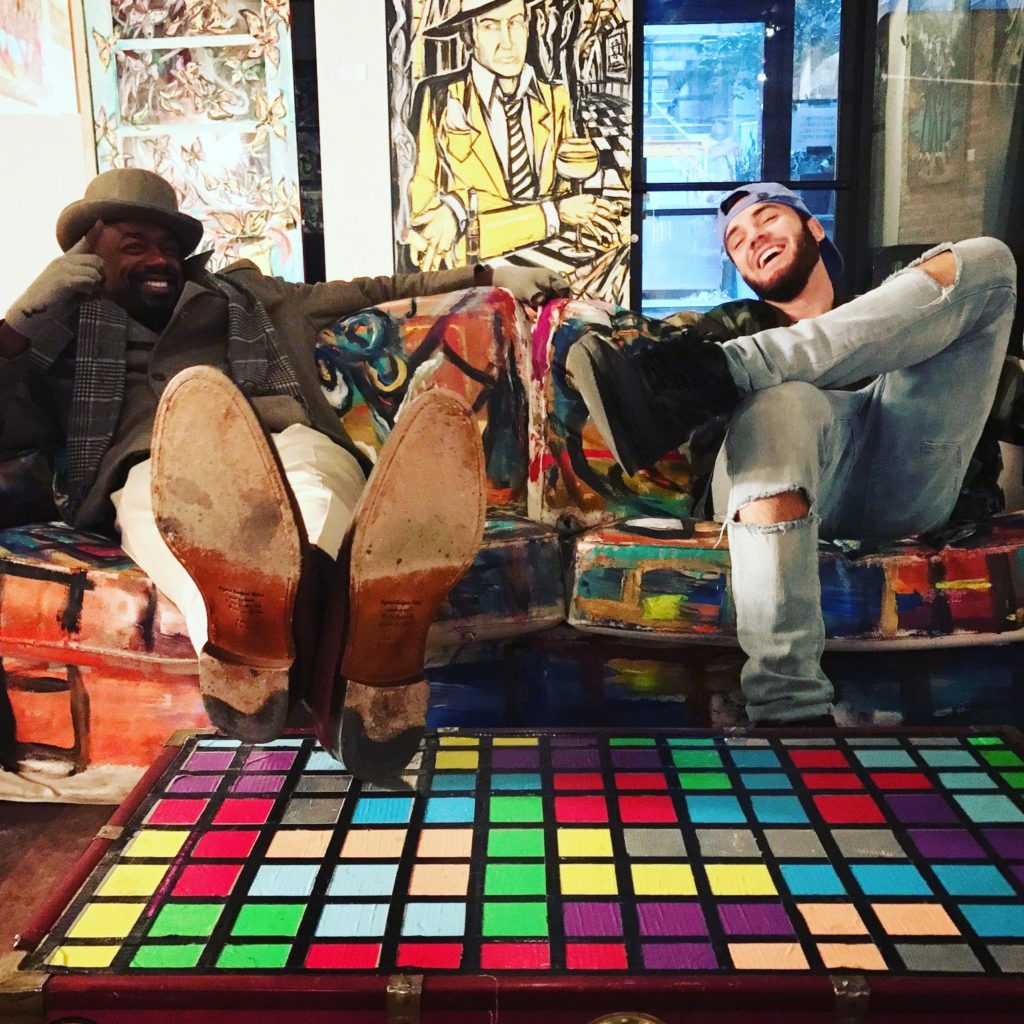