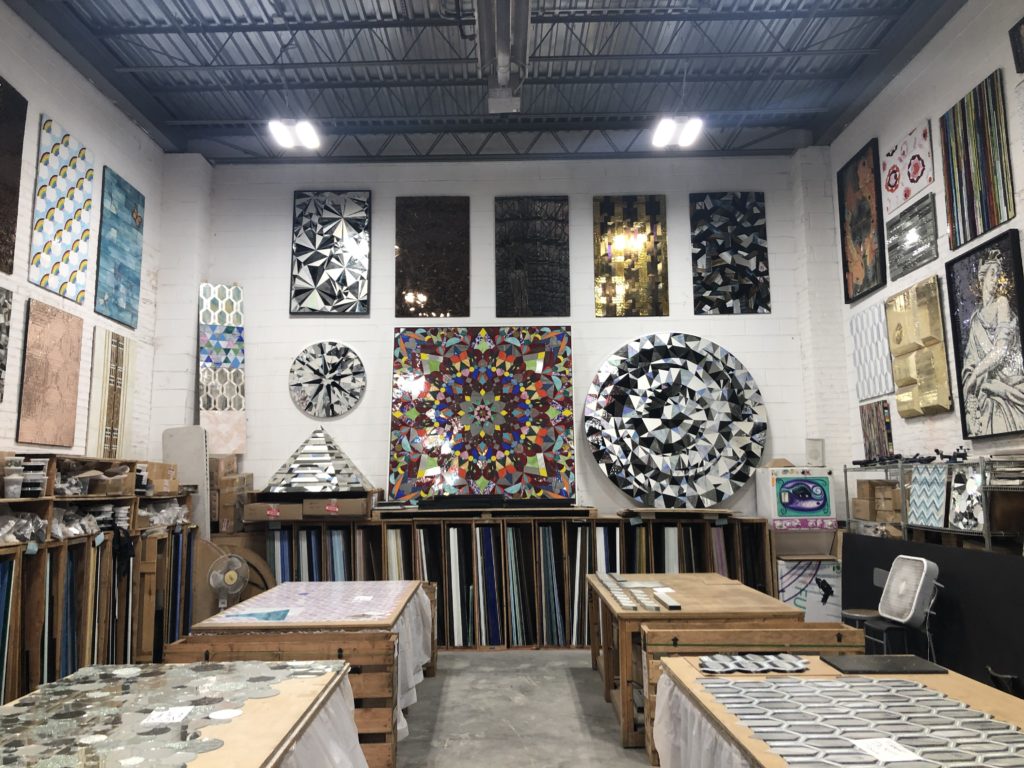 With nearly half a century experience handcrafting custom tile patterns for kitchen and bath—textiles, carpets and artwork—Allison Eden optimally epitomizes Fractyll. Infinite blends of color, dimension, shadows and light shine amid frosted, acid-etched and stained glass types: “Albeit iridized white or cobalt blue…we have a special kind of glass here called dichroic glass” articulates Gary—Allison’s talented husband. Dichroic glass ‘looks green but changes to blue, due to its unique property of reflecting light.’ Developed in the 60’s to coat the Lunar Orbit Lander—the dichroic glass enabled it to pass through the atmosphere immune to heat absorption. 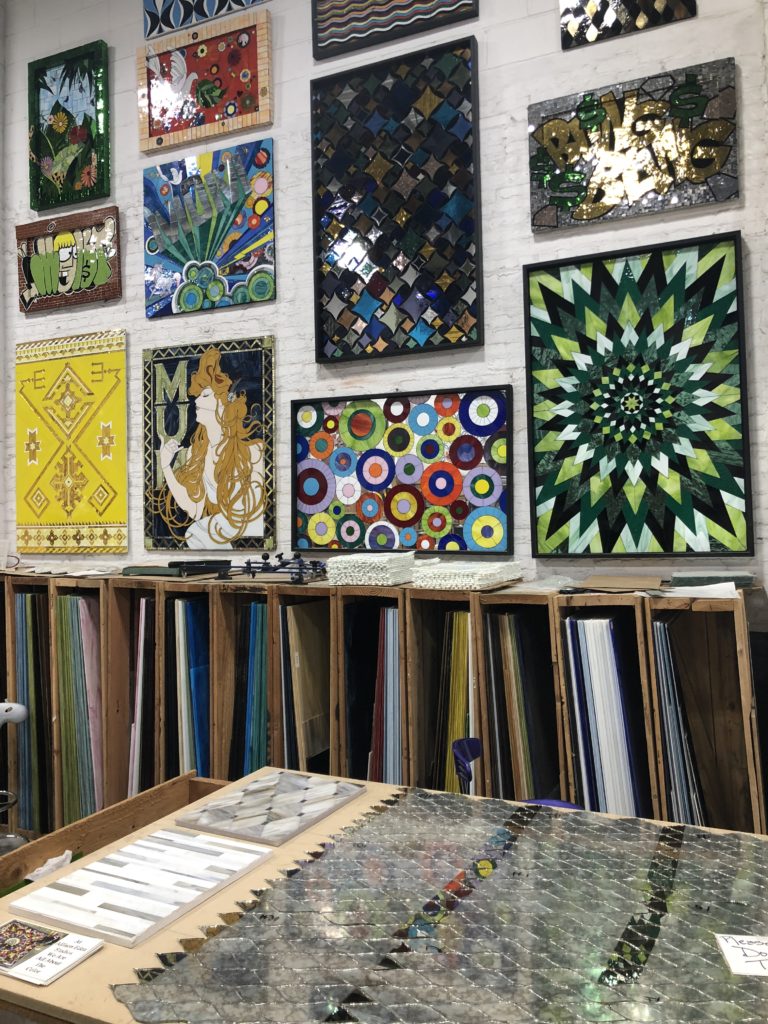 “Take away all the light in the room and you’ll only see these green pieces of dichroic glass; they are not photo luminescence—(they don’t glow in the dark). Our next step is to employ this dichroic technique to create rubies, sapphires, emeralds, and gems that aren’t even in existence—such black diamonds.” 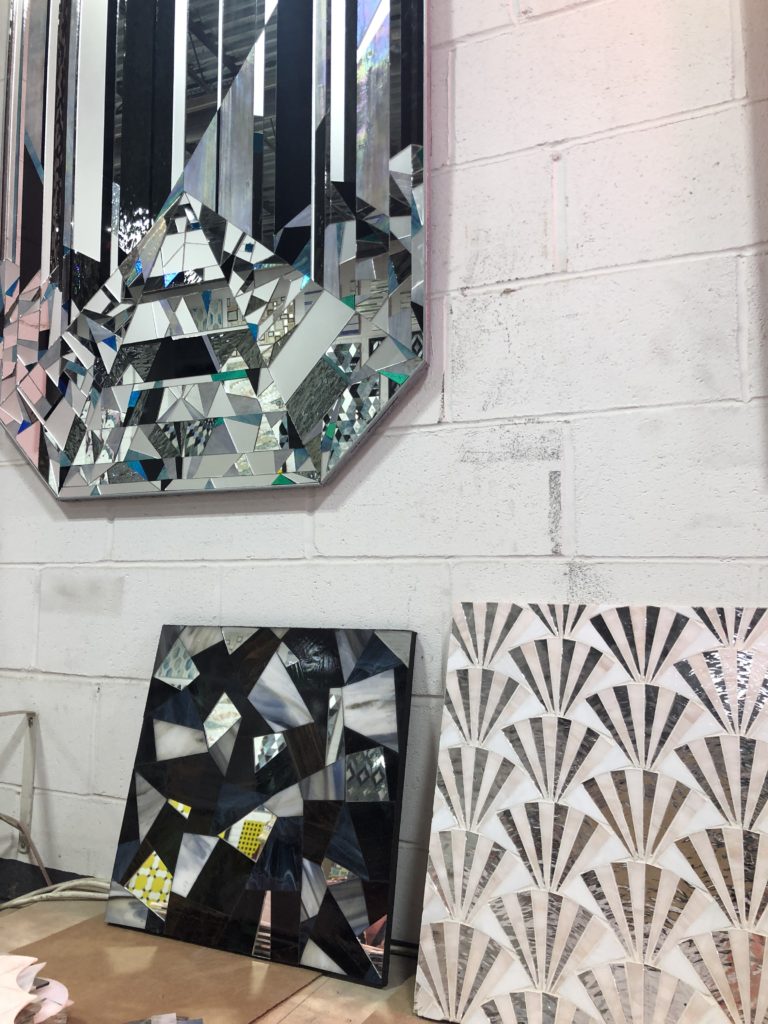 Calculatedly cut and precisely positioned, mosaic art recreates culture and history. Originating circa 3000 B.C. in Uruk, Mesopotamia—southern Iraq today—mosaic art was comprised of embedding geometrically patterned terra cotta cones unto walls and buildings. Decorating monuments and palaces, it was the Egyptians who spread the art to the west, via Italy. Mosaic art became subsequently foundational to Ancient Egypt, Greece, Rome and Byzantium. Mathematical formulas- once decorating the mausoleums and church pavements in history- were elevated to an art form detailing scenes of people and animals. 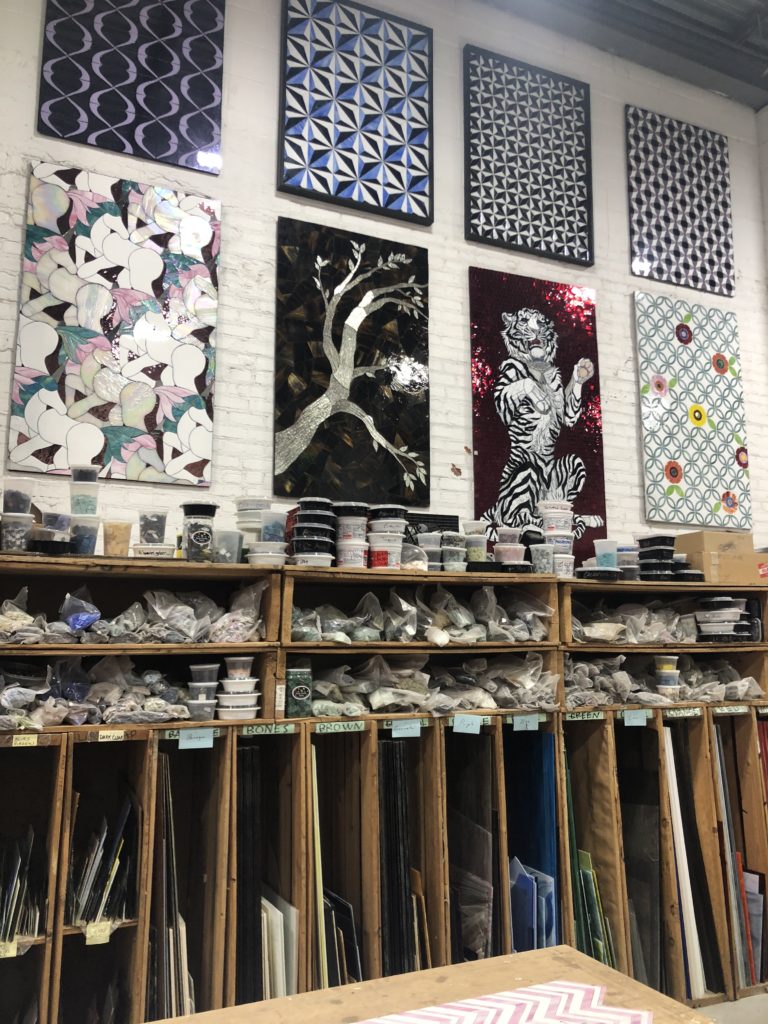 Most astounding is the accuracy and detail with which each tile is place alongside other polygonal patterning at Allison Eden Studios. Albeit the reenactment of lips singing, a tiger celebrating its kills, aquatic streams, jungle canopies or bubbly tresses, Quasi-crystalline scenarios abound. Gemlike artworks in which patterns never repeat but are always perfectly symmetrical intonate infinity—comprised of piecemeal memories placed unto mirrors mesmerized with mosaic artistry. 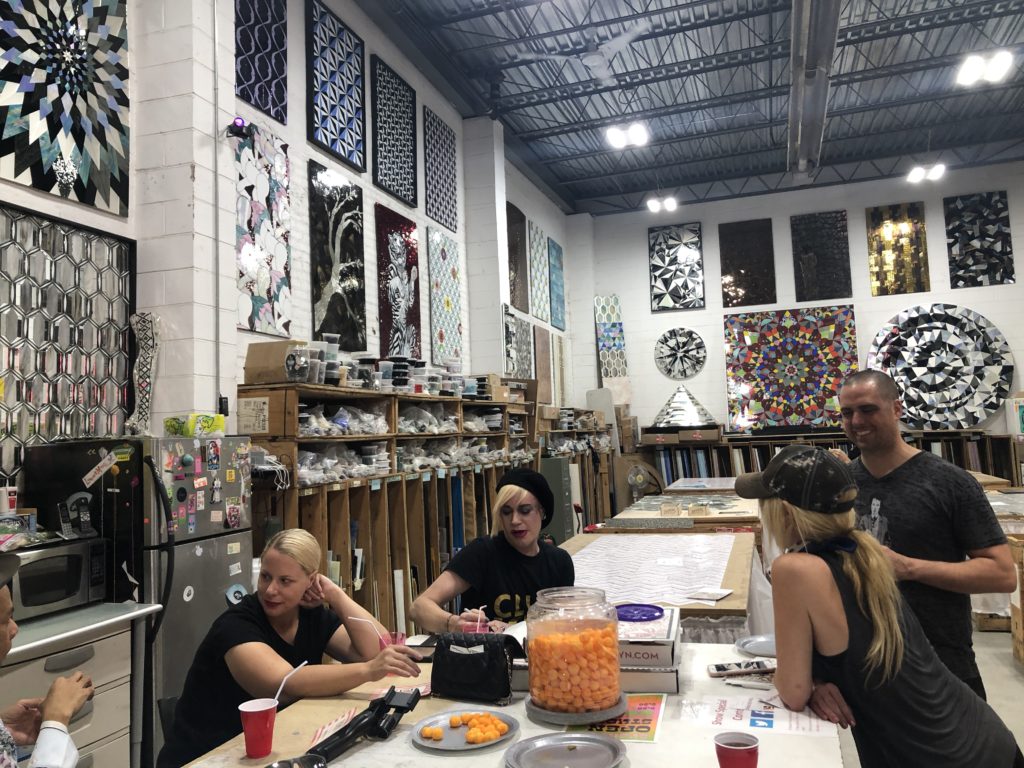 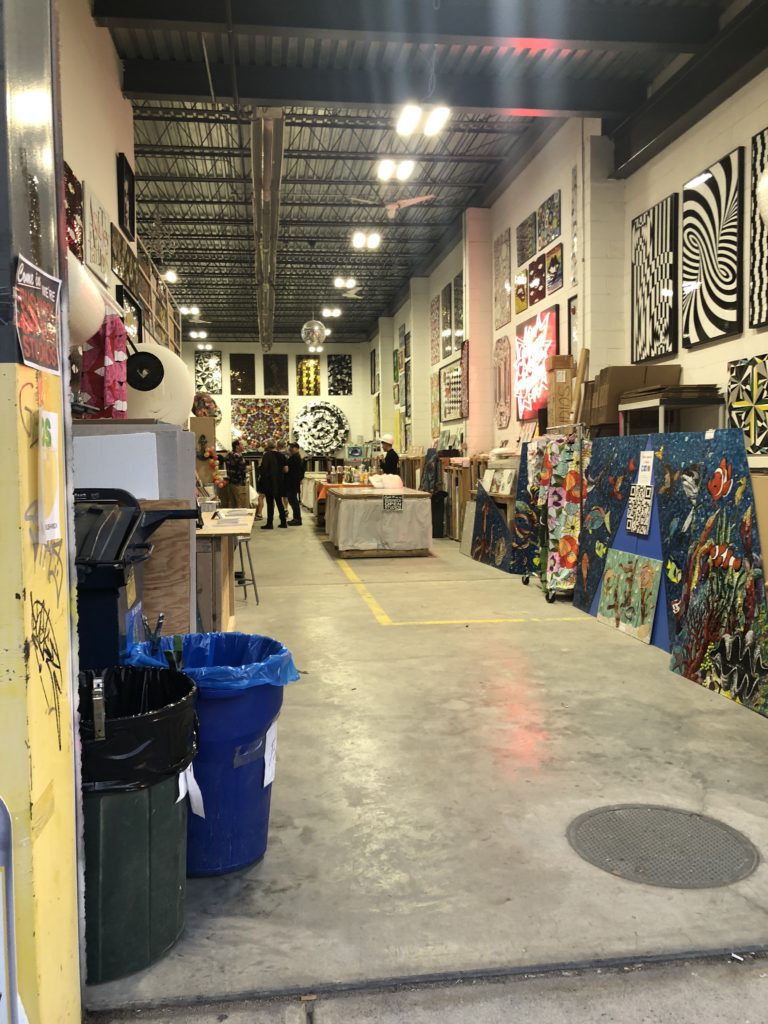 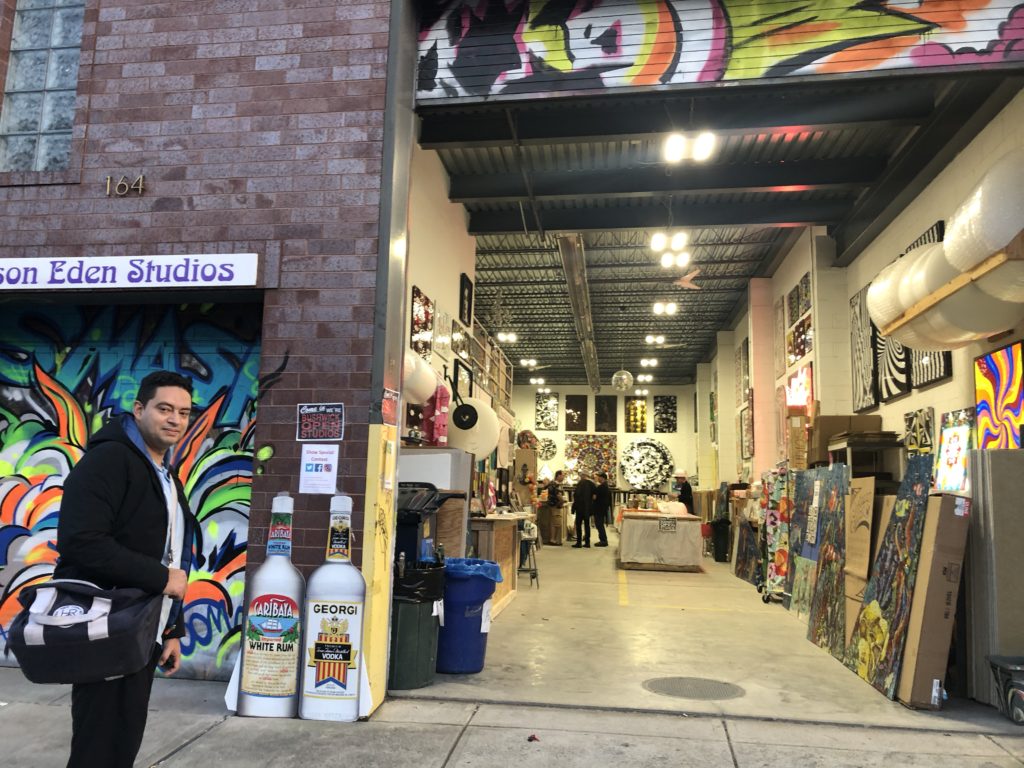 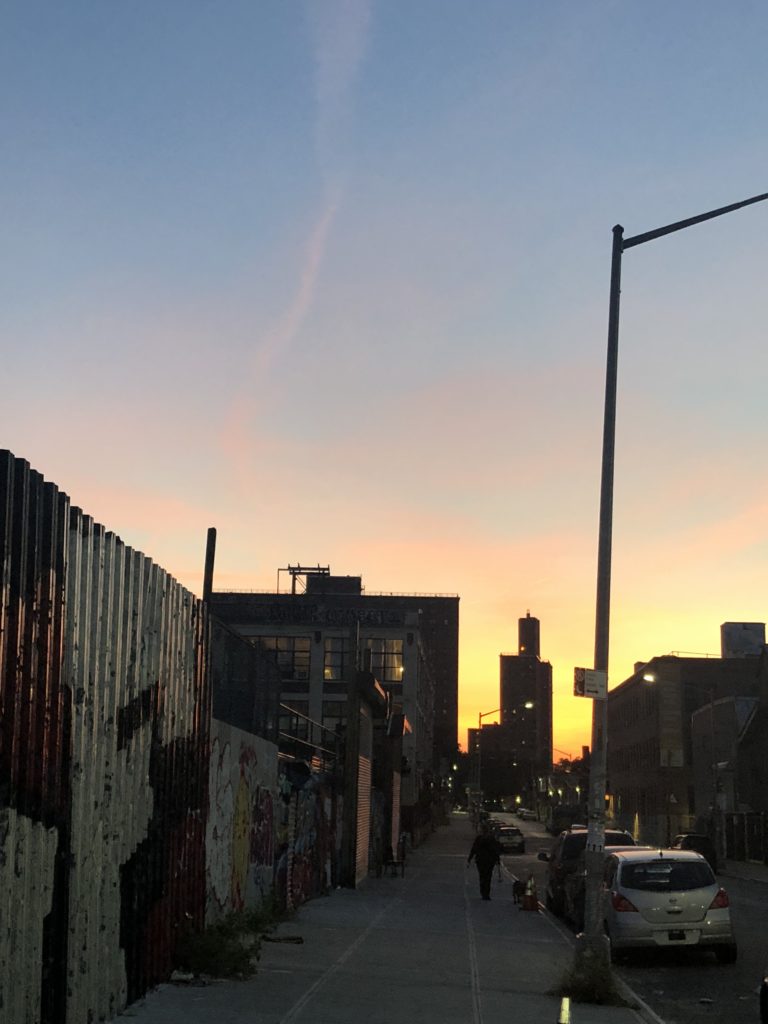