“This is not a woman thing; this is a human thing. Until men soften and see themselves as emotional creatures as well as rational ones, we will continue to be nihilistic.” –George Lewis

New York City epitomizes the reconciliation of opposites: Rich and poor, dark and light, or high and low. George Lewis re-privileges the notion of empathy, humanity—written large. It’s about people and how they connect through Eros and spirit, through a selection of sensually iconic photographs. “It’s about sacred femininity. It’s all about exploring the revealed and the concealed, the division between the sexes and the gamut in-between,” notes the artist. The Other Within, featured at Lu Magnus Art Laboratory and Salon, personalizes the moments of unveiling formerly included in Lewis’ Behind the Veil, Sexuality in the Middle East exhibition—a few years back. Valentino bought more than a few pieces that opening night, and rich Saudi princes commission Lewis to photograph them, regularly. 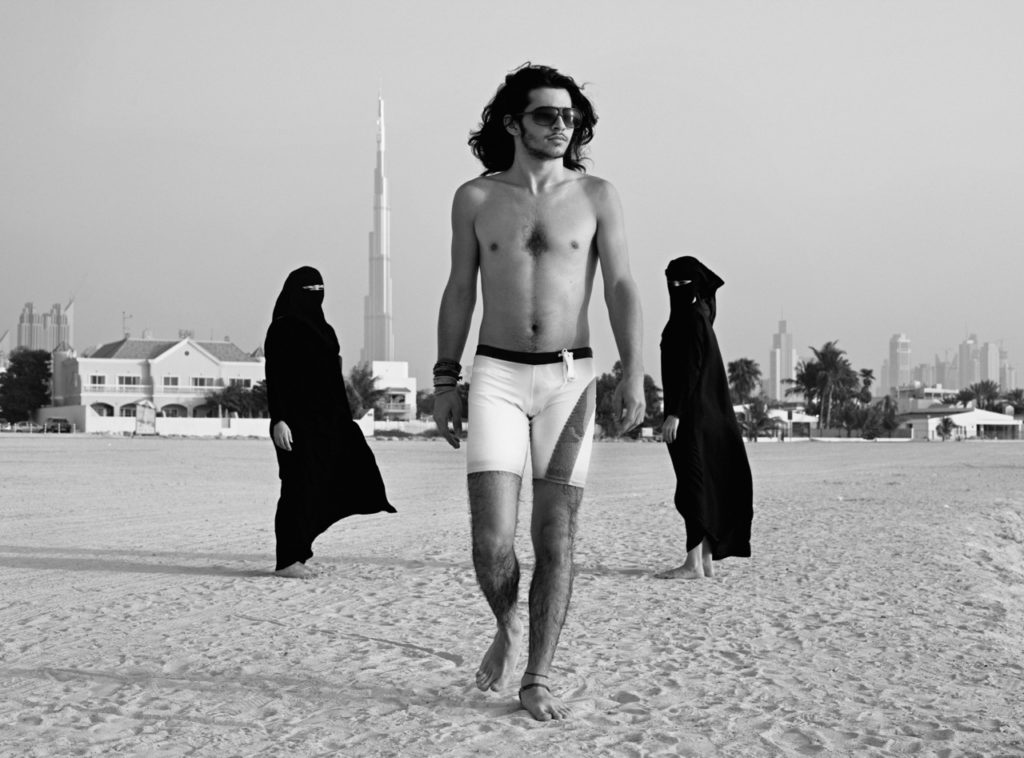 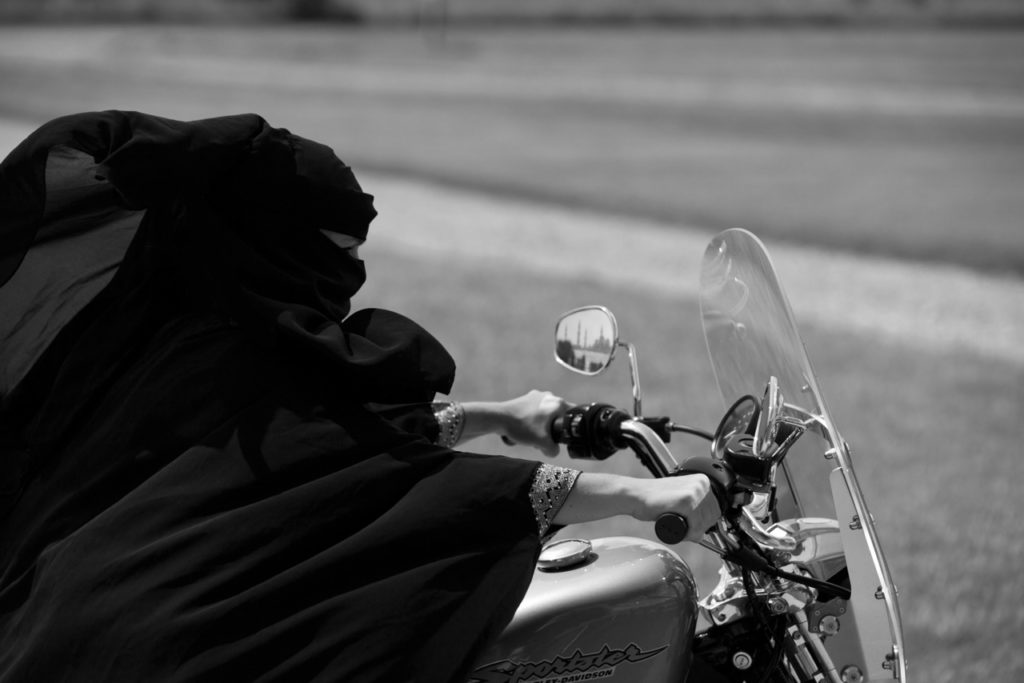 There is another point too Farrah that you must stress if you are going to get it right about me… is about sacred femininity. This is not a woman thing; this is a human thing. Until men soften and see themselves as emotional creatures as well as rational ones, we will continue to be nihilistic.  This point about power and its nature and women and their divine power is fascinating. I concur, much like the Taoist say, and in particular Laozi and Zhuangzi: Women are stronger because they do not have to rely on the lower /base chakra of force and aggression. Men have much to learn- there is a strength in gentleness and a weakness in violence.

We are seeing this very clearly in the manifestation of IS/ISIS currently. The old adage that women are further along in the evolutionary cycle than men has clearly become clichéd for a reason. Sad times. Hope though is around the corner as we move out of Pisces and into Aquarius. Do look at 2nd and early 3rd C Common Era and decline of Rome, Han, Kushan and Parthian and see the metaphor. This is my life work. Why–because nothing else matters. Literacy and math are secondary to this bigger struggle for global civilization. The pendulum is moving fast. We have to regroup and focus on the communality, emotional collective lest we be drawn into the reductive collective nihilism of our epoch. Tough to swim against the tide, I know but we must and we will. That is consciousness.

Penetrating the private with profound subtlety and grace, Lewis stays clear from administering a political agenda. Lewis’ deep interest in the human condition propelled his four-year artistic and spiritual journey to the Arabian Peninsula. Meddling with what he coins as “the revealed and the concealed,” Lewis’ point of departure is human basic needs. “Everybody eats and everybody fucks,” he intonates. Subsequently drawing on this relationship between the sacred and the profane are his “Human Nature”, “Ya Habibi”, and “Curious”. 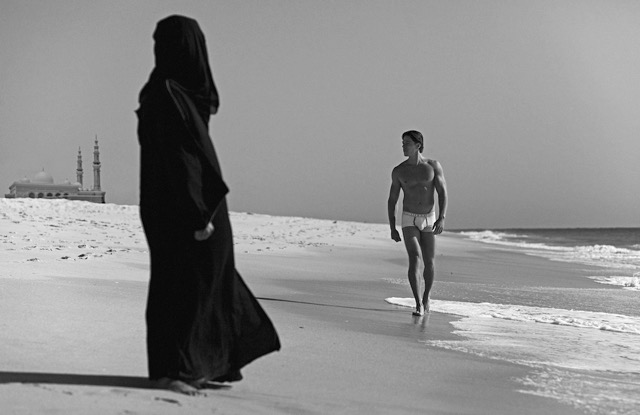 In all three strolls in an eminent scantily clad sculpture: a Michelangelo ‘David’. Manliness shooting through his every muscle fiber, cell and bulb visually magnetizes the fully veiled women treading the same path. Tight white swim-shorts on an exposed man contrast wildly to the loose black niqaab on anonymous women. A large mosque, serendipitously spanning the background of each of the three photographs further intensifies cultural symbioses.

Mosque or no mosque, married or widowed, the quixotic women gaze unselfconsciously at the hypnotic passerby. They inadvertently take on the role of the gawking male admirer. The gentleman in all of these photos is the objectified sex figure to which all eyes helplessly gravitate. His allure shamelessly draws on the fascination of nebulously disguised humans, whose sexualities are visually concealed. The veil ironically enables women to feed their eyes and imagination, without being caught, or scorned. Basic needs could be tempered or repressed, but their seeds extinguish at death, only.

The veil functions as part-shield part-disguise.  Examining the full  ‘gamut’ where anything is possible, the seemingly narcissistic male juxtaposed with local women, whose haute couture collections were limited to the private space, depicts mutual fascination or attraction. Humorous, yet charged with intrigue and social reverie, the man was a novice at bending the rules of life and love. The women watching become rebels in thought, violators of the sacred. 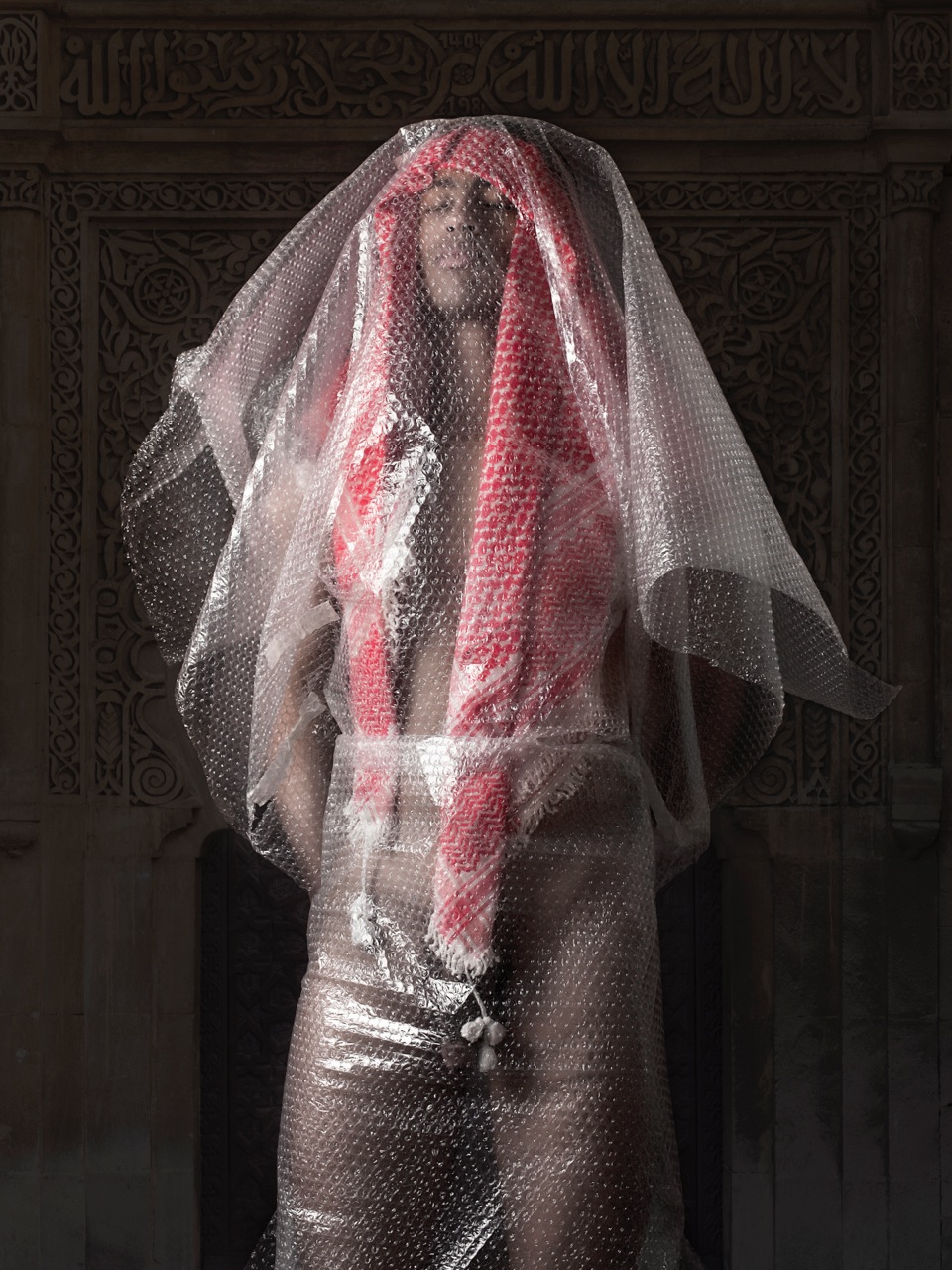 The veil reinstates itself as a potent, beautiful symbol in “Kinky Kandoura.” A nude man wrapped in transparent bubble wrap that hangs over his face and head like a bridal curtain is alone. The vacuous black background highlights the weightlessness of such bubble wrap. Veiled indoors, the suspicious specimen derives pleasure from having the freedom to dance, pray, or lay alone. A charade unacceptable in the public space, a man so hypnotized by the veil’s power cannot help but indulge in its strange fabrication. The bubbles, perhaps an extension of the joy or levity so artfully endured alone, the passionate man appropriately sported a dark red scarf beneath the layers of meticulously engineered bubble wrap. Neither contrived nor invasive, Lewis’ genuine empathy and poise are rewarded with cleverly insightful photos that inspire in-depth discussion and reflection.                              “Kinky Kandoura”

Fueled by an innate love and interest in learning about other cultures, George Lewis attended a same-sex boarding school for twelve years. He notes: “It was largely responsible for why I was so successful in going to the Middle-East and getting people to reveal something of themselves.” Rigorously strict, boys caught canoodling with girls on school premises were expelled. Boys caught having sex with boys, however, were let off! Such circumstances have tamed Lewis into “not [being] frightened with dealing with the gamut of sexuality, or cultural civilization,” and we see this through some of his more controversial works. Addressing grave obesity, explicit nudity and a transsexual Christian convert, Lewis’ preoccupation with the human condition upward spirals into through the telescopic lens of sophisticatedly complex sexualities. 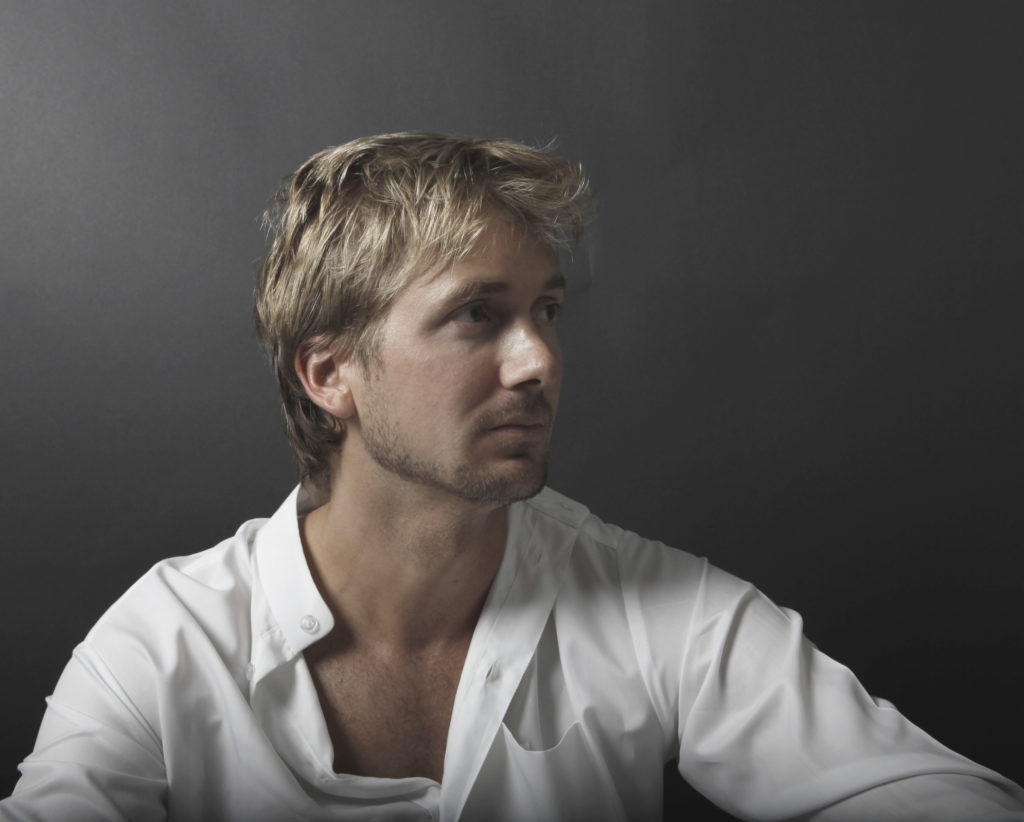 In particular, the “Cross Dresser” tetrarch features four pieces on a secretly gay 26-year old, who was being forced to marry a year later. Dancing privately in his sister’s abbayah, Lewis intimately captures a young man’s dancing through opaque veils. Concealment, his second nature, is made evident by the fact that he dances most comfortably from concealed and isolated. An electrifyingly ironic paradox, double standards infuse the veil symbol with textures and possibility. Shed like skin in private, Arabian women cleverly transcend the subservience too commonly attached to the burqa or niqaab. Little do they know. However, that the men for whom they save their hair, skin and body. Borrow and buy their own veils to bring home. Substantiating men’s lives, either physically or metaphorically, it is fear and shallowness, and not the fabric of the veil that ought to be lifted and denounced. 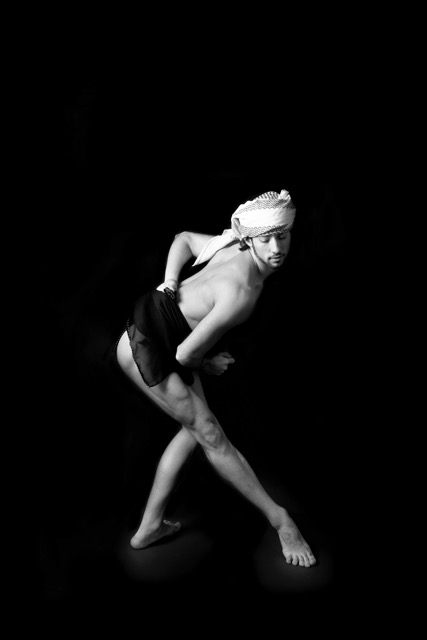 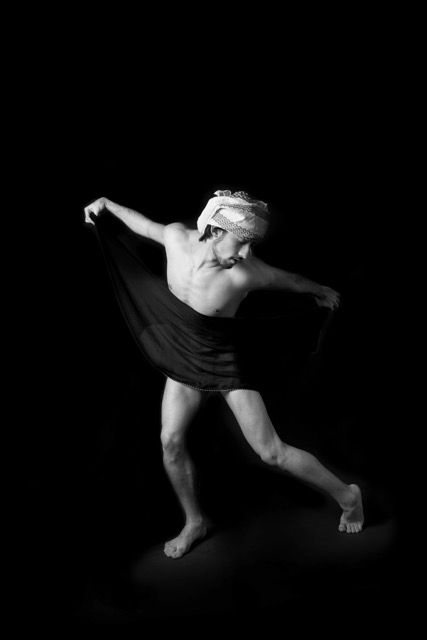 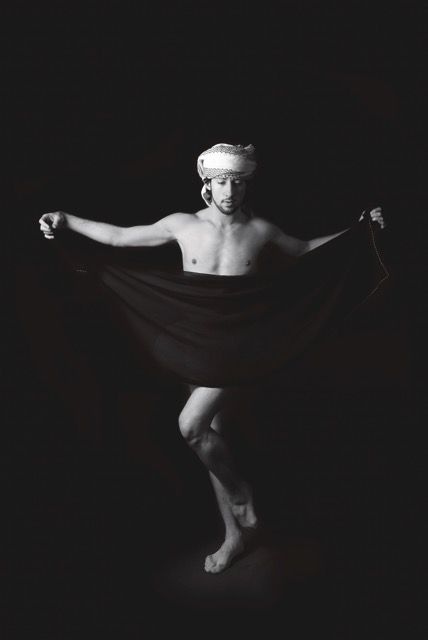 Veil coverings signify freedom and anonymity for some and concealment or protection for others. Utter necessity to the fearfully closeted, women have found fashionable ways to publicly embody their sexuality, without foregoing sacred custom. Had the dancer, whose sculpted body ironically appears more masculine than the beach studs’ had been rich, “he’d be dancing for the London’s Ballet National,” says Lewis.

Exploring the duality of the public versus the private realms, peculiar to men and women of Qatar, Yemen, the United Arab Emirates, Saudi Arabia, Kuwait, Bahrain and Oman, Lewis highlights the shortcomings of sympathy. A mere ‘product of pity, sympathy denotes fear’, he articulates. Anything fearful criticizes, and “I am not here to criticize, but to empathize.” Empathy carves far deeper paths of communion than sympathy, intonates the poet-philosopher at heart. It is the ‘the pure product of knowledge, nuance and calmness.’ Lewis’ photography informs his painting, but research, introspection and linguistic maps lay their course and foundations.

Lewis blurs the division between the two sexes, and beautifies the nuances in between.  “On the Road” portrays two fully veiled women operating a motorcycle at high speed. In Saudi Arabia, where women are forbidden to drive. A mosque filling the rear view mirror renders the gesture all the more rebellious and exciting. Speeding against the wind in the opposite direction of Islam then. These women are hardly confined to their Western conceived ‘oppressive’ regimen. Aggressively rumbling, controlling the motor of freedom, Arabian women are not crying victims. While the laws of the Gulf are quintessentially rigid compared with their Levantine, Maghrebi, Iraqi or Egyptian neighbors. They find freedom through fantasy in public, and dress better than most westerners in private. Inverting sexual norms, because Lewis inspired them to, these ladies pledge allegiance to health, courage, and drive. 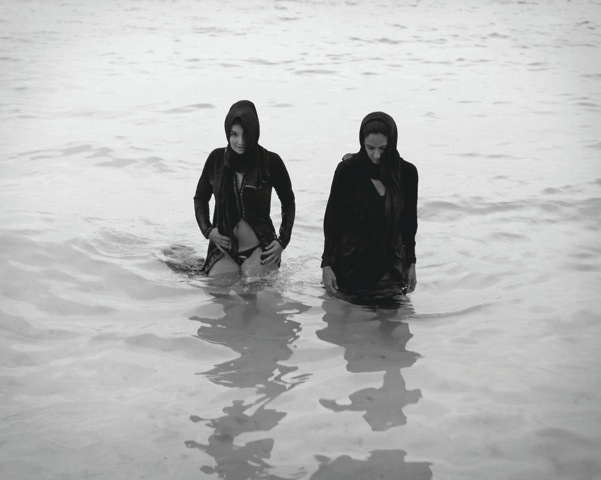 The linearity of sexually prescribed roles is further disrupted in “Burkini Beach”. It captures a woman’s suavely baring her thighs, belly and panties in the sea.  Supple light flesh enticingly contrasts with her dark-veiled arms, neck, head and modest female companion. Sultry lips, parted as though she were singing or sending coy kisses to the camera. The innocent yet bold woman’s fashionable lasciviousness invites love. Transcending stereotypes of confined, subservient Arabian women, free-spirited seductress moves us to questions our Western ideals. Beauty is mystery and contrast. Bare-it-all bikinis lack the sublime textures and color inflections cast ever so delicately by the dark burqa against flesh, water and sun.

Reconciling differences is best displayed through the photo, “Ambiguity Embraced.” A solo man stands richly toweled. Head retreated sub-blanket, into what appears to be an octopus-like arm cradle, I guessed that it was one man. Apparently women who really want children see a man with baby, while gay men see two men enthralling each other. Either way, it tells the story of how everybody wants to be embraced. It focalizes the notion of reconciling differences, empathy, in the gesture of a long, deep embrace. 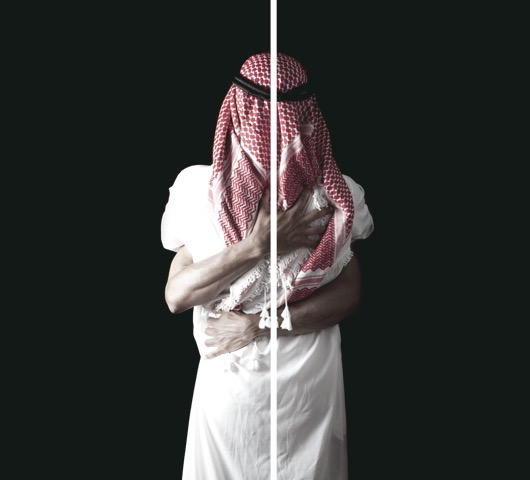 “While the sensuality is very beautiful between Arabs, there are parts of it that should not and cannot be revealed”, says Lewis, who—is holding back so much, in fear of tapping scandal or controversy. “Gender Bender” truly encapsulates the complexities of light created by a cross dresser’s maneuvering a mirror into different vantage points. Set behind a curtain, Lewis constructs his own protective veil by keeping us wondering what incredible people he encountered and inspired. If there’s anything anyone could learn from the exhibit, it is that mystery is supremely alluring.