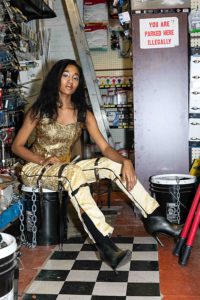 SHE IS: Women Empowerment through Art

“SHE IS” is an art show featuring 20 female visionaries. Their profound experiences do not shy away from expressing themselves through mixed media, sculpture, print and canvas. Curated by Marina Dojchinov, the goddess whose expertise spans the spokes of the ultimate culture fractal—One Art Space has the privilege of being blessed by incredible women. Nestled warmly […]