At first, a hardware store hardly seems an appropriate venue for a runway. However, for Amanda Mehl’s AW19 show, “Love Handles,” the wrenches, paint samples, and fake grass at Garber’s made the perfect environment. The industrial surroundings provided an intense juxtaposition to the prominently featured animal prints and faux fur. These animalistic elements were paired with zip tie ponytails and paracord accents, which perhaps would seem too disjointed had it not been for the buckets the audience used as seating and the home improvement tools always within arms’ reach. 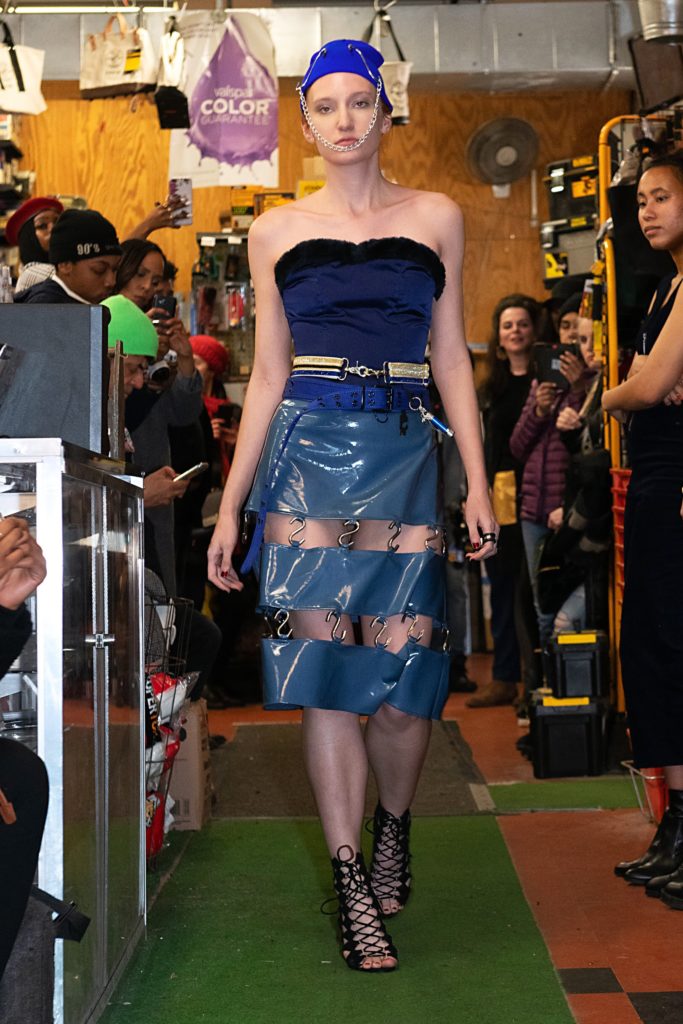 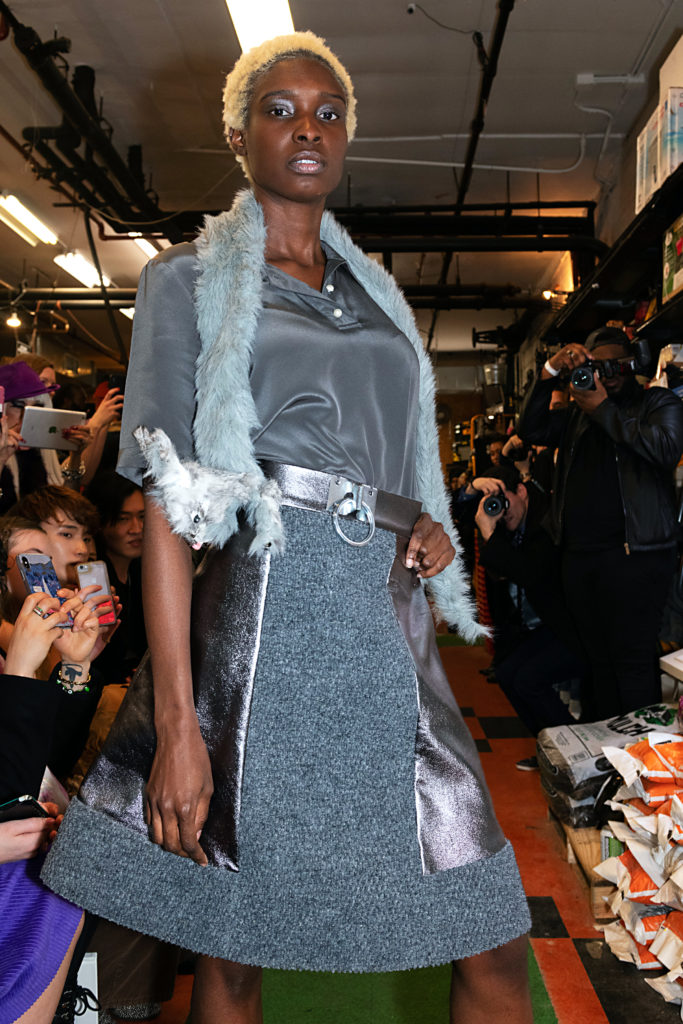 The show opened with a rock song, “Little Red Riding Hood” by Sam the Sham and the Pharaohs, which, predictably tells the well-known tale of Little Red and an unwelcome wolf. This song choice gave a clear picture of the show: despite a power struggle, in the end, humanity triumphs over nature. Despite the wolf’s devouring of the grandmother, the woodcutter eventually saves the day and slays the beast. This story is told mainly through fabric choice. Initially, the collection showcases a vacillation between solely animalistic looks with faux fur as well as fabric techniques that mimicked animal textures and starkly metallic outfits that would fit in perfectly in a dystopian business environment. After a period of looks which heavily favored the artificial and man-made (accompanied by more electronic music), outfits began to combine elements from both spheres. By the end of the show, it no longer seemed to be an either/or scenario, but rather one in which the artificial and natural coexisted (though not perfectly cohesively; many looks contradicted others, representative of the chaotic nature of the relationship). This narrative is reflective of human history and our industrialization: after periods of intense industry, there are pockets of time in which we attempt returns to our roots. For example, the industrial revolution followed by the conservationist movement in the early 1900s, or, more recently, the rise of technology followed by a generation of teens fighting to end climate change. Overall, the show seemed to speak on the rise of industrialization and humans’ manipulation of their environment. 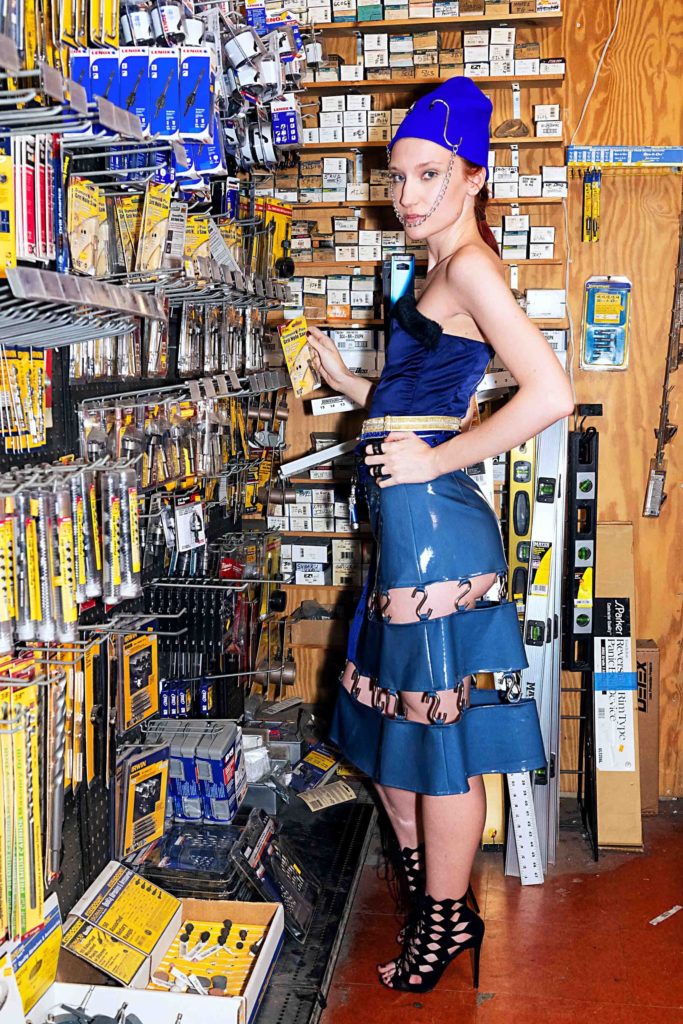 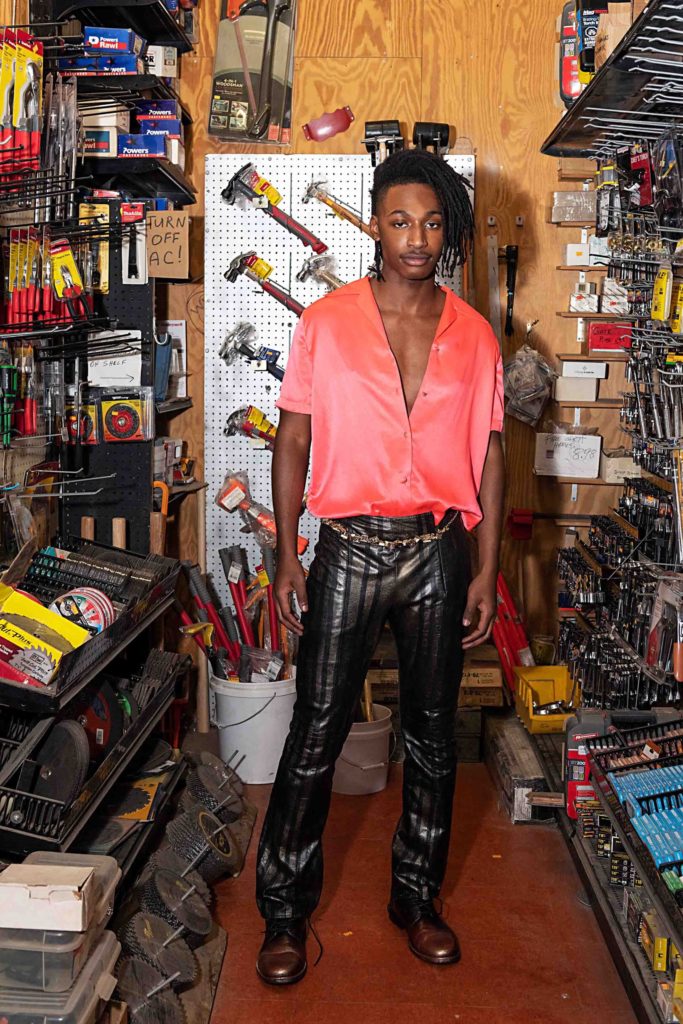 The later addition of bags to the ensembles proposes the idea of ownership or possession. Some models wore aprons or fanny packs that looked like they should contain hammers and paintbrushes. This alongside the progressively more layered, aggressive music, all encased in a hardware store, cemented the idea of humans not only owning, but manipulating the places we inhabit. 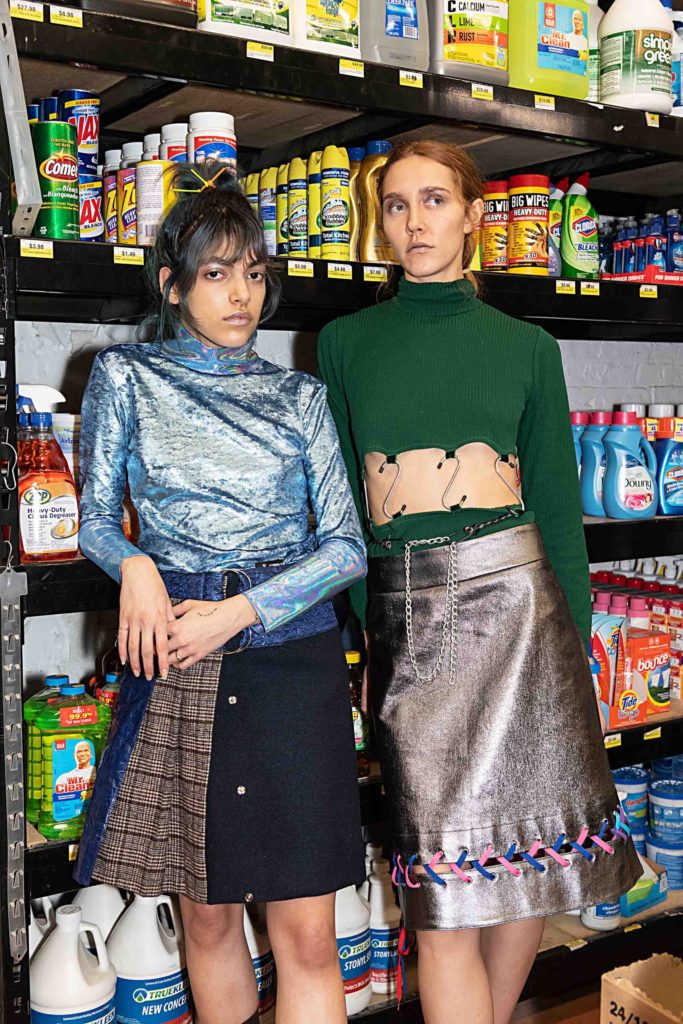 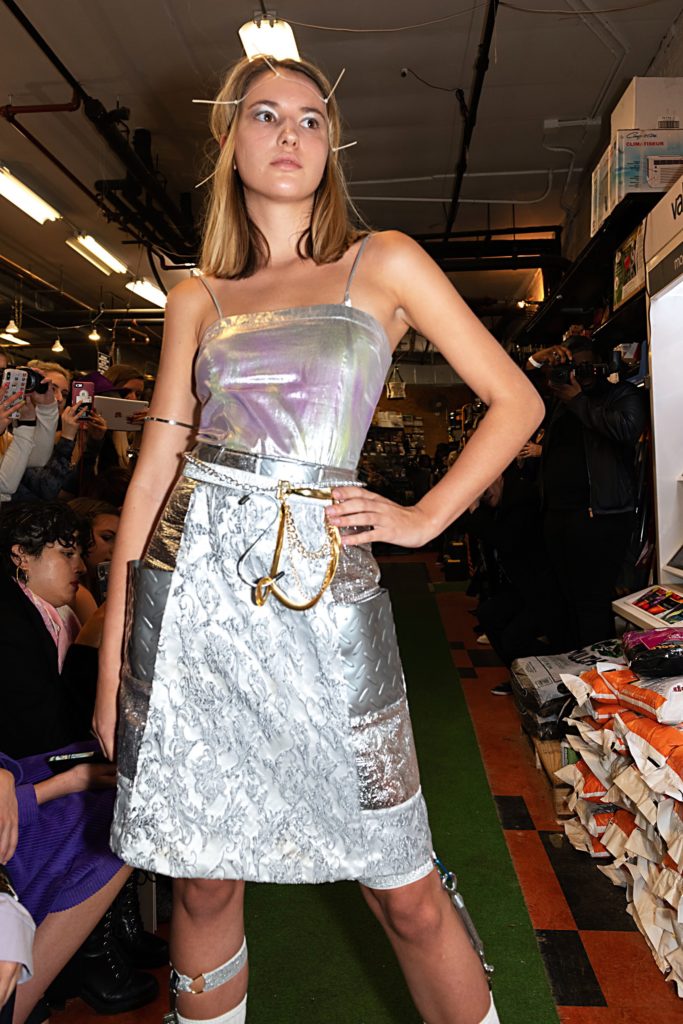 One outfit featured a promotional t-shirt for Garber’s Hardware. This look was the most ready-to-wear, and it seemed to suggest that the high fashion world isn’t the only sphere losing sight of nature; everyday citizens display industrialization in their most mundane clothing. This look, along with perhaps the apron look, brought up suggestions of class. A t-shirt in an otherwise decadent collection certainly stands out, and the apron-adorned model looked as if he should be working at Garber’s, not strutting there. 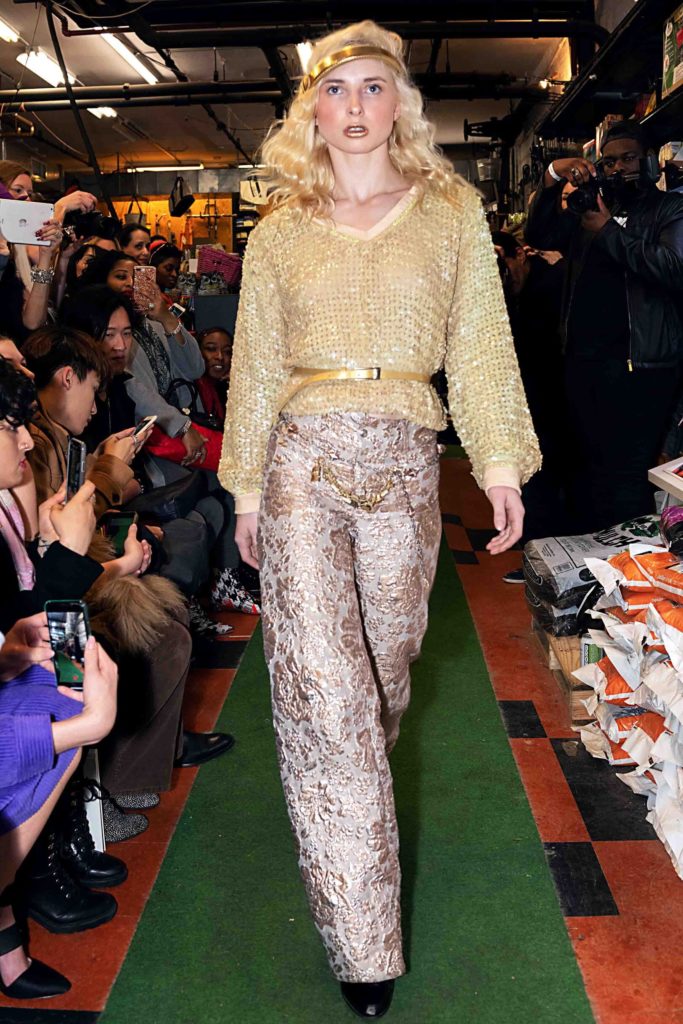 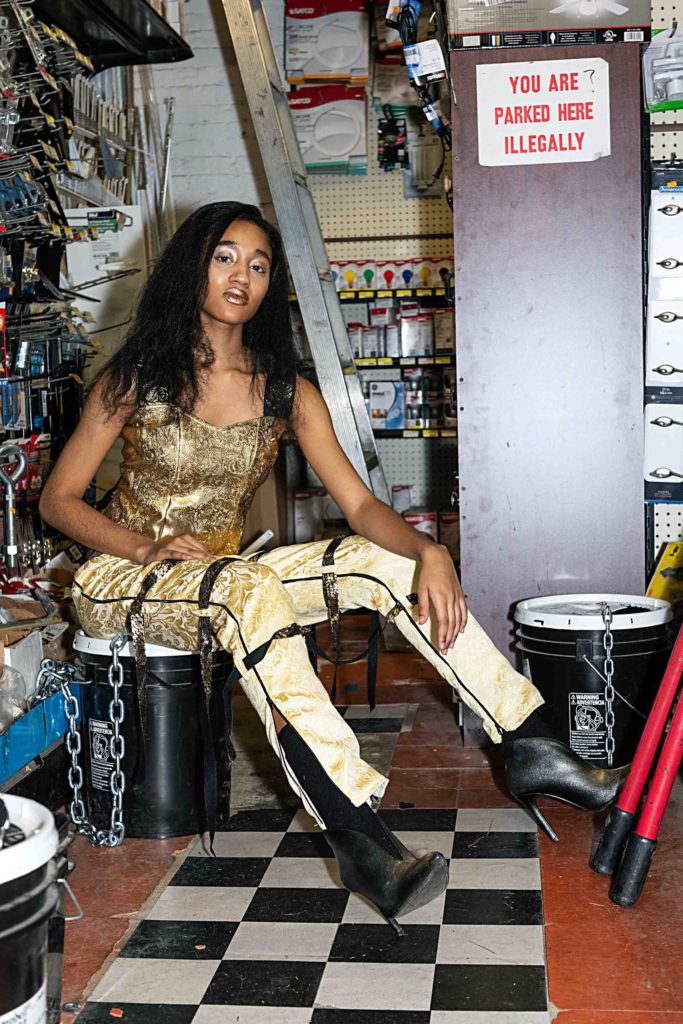 The collection’s name, “Love Handles,” creates confusion because not only is the designer herself thin, but so were all of the models. It was not clear if this irony was intentional or not. It’s likely that the name was chosen because of the industrial image of physical handles on doors and cabinets and drawers juxtaposed with the metaphorical handles found on some bodies. This name combines both mechanical, artificial objects with the human body; in fact, the name implies that handles are not merely creations of humans, but part of them. Handles could serve as metonymy for the larger concept of industry, and subsequently the name could be interpreted to mean that humans and industry are intertwined. 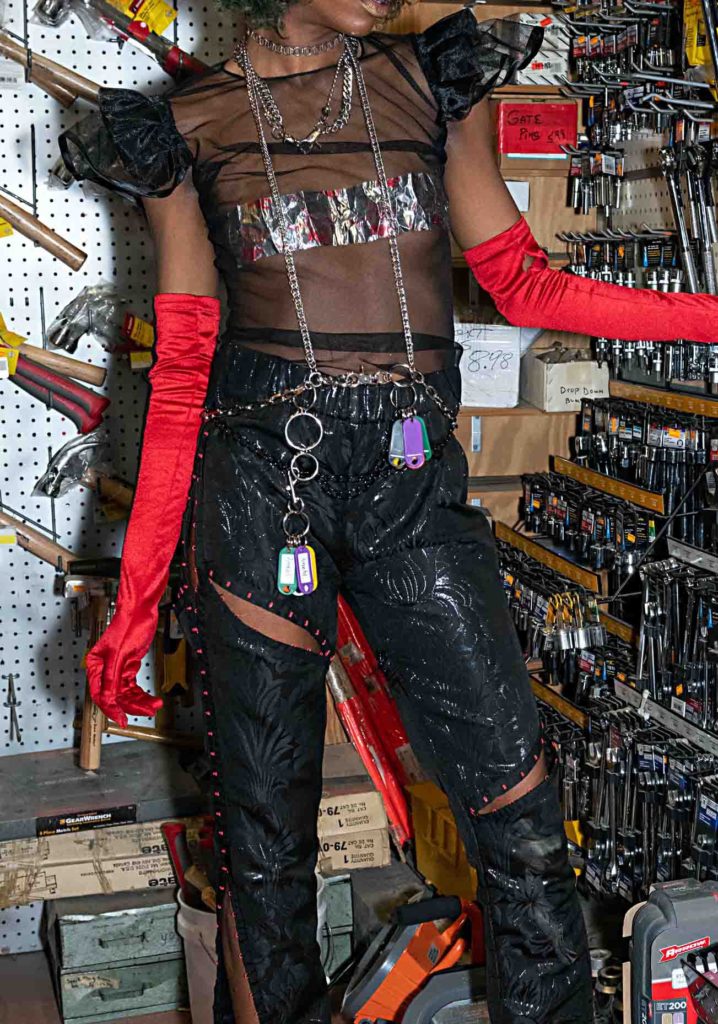 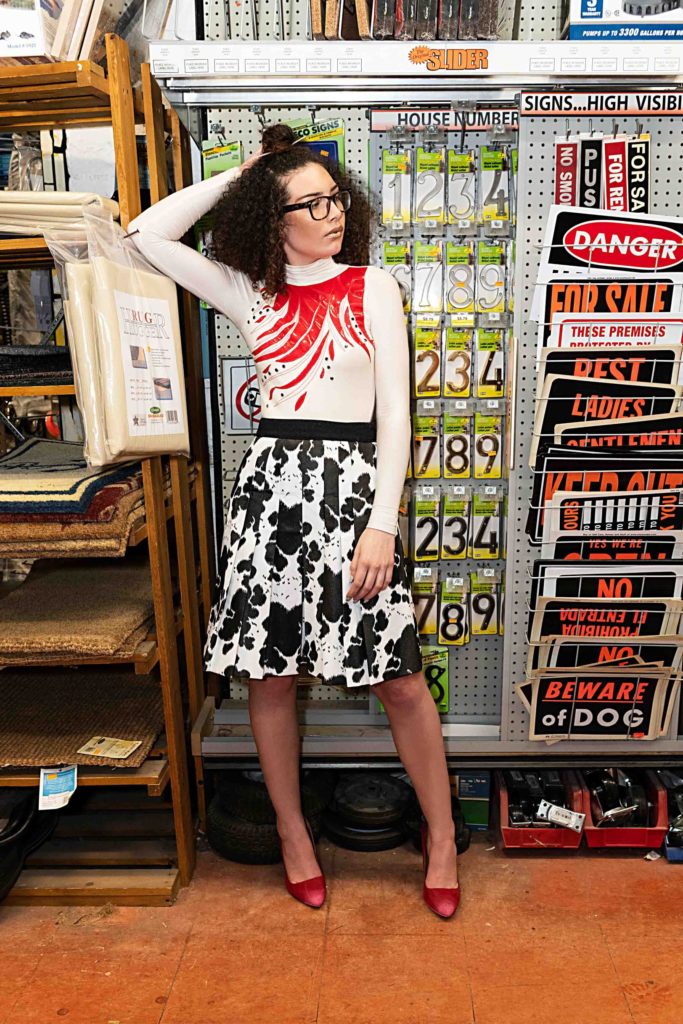 It might seem too far of a reach to gather all of this from a small show in a hardware store in West Village, but in 2019, what else is expected of a collection if not a political statement? Clothing is no longer merely aesthetic, whether it wants to be or not. Runways have become platforms for what issues designers care about, what communities they want to protect, and how they think we can help. Amanda Mehl’s collection conjured conversations about everything from class to climate change, and whether she intended all of those conversations or not, they are important to consider as an audience member. 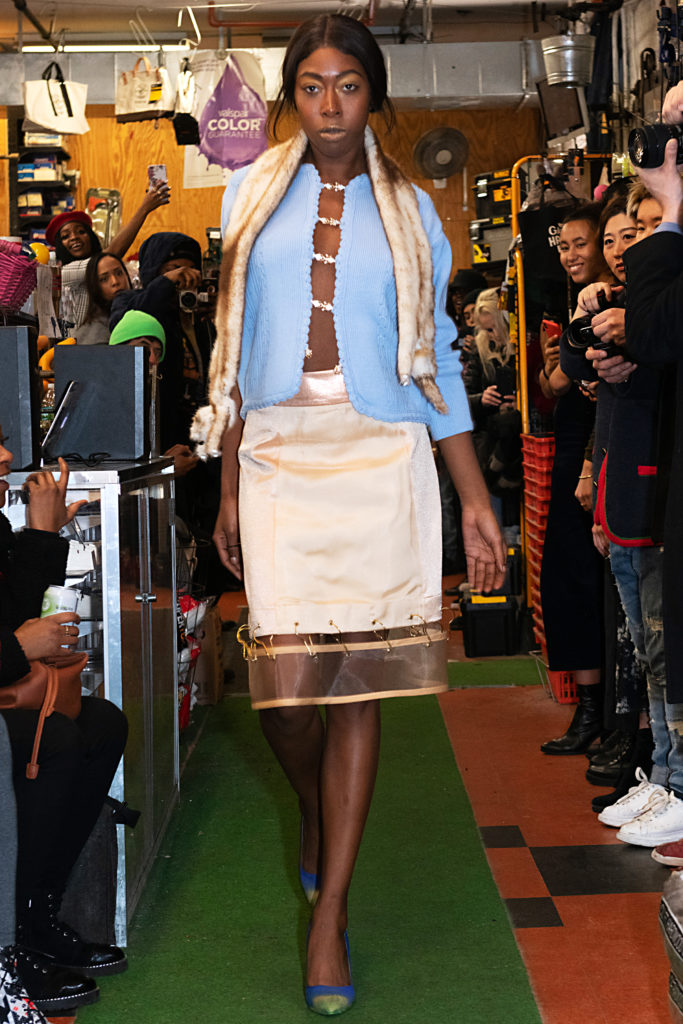 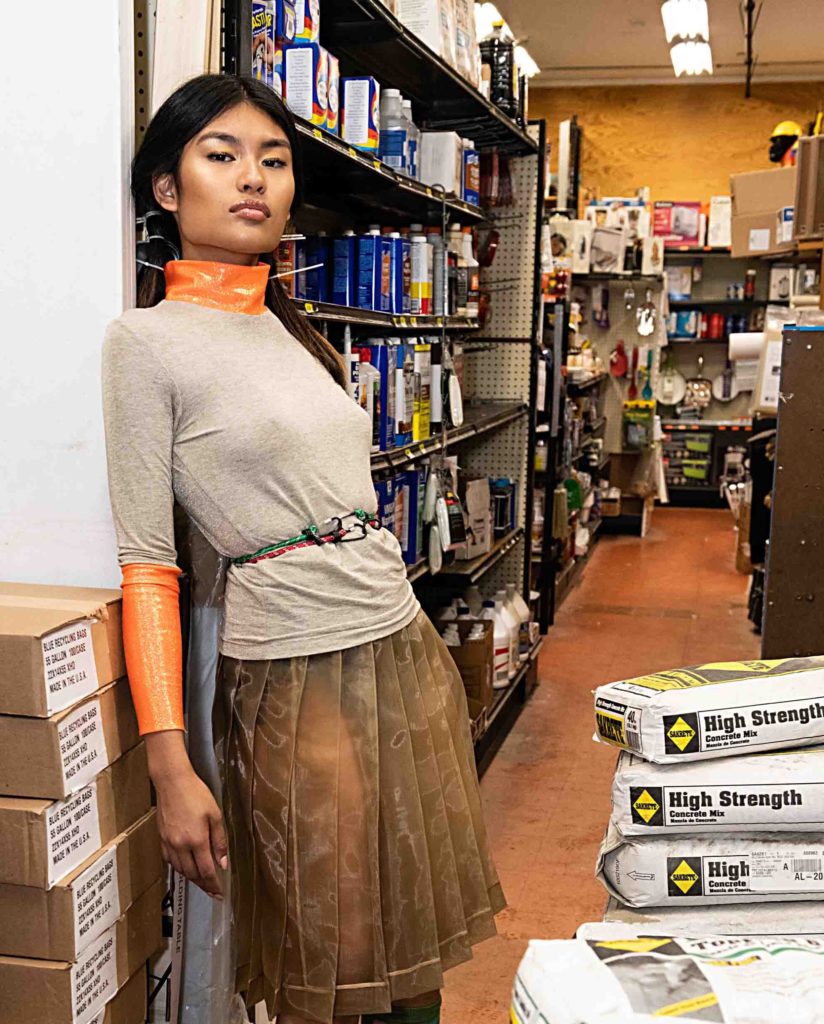 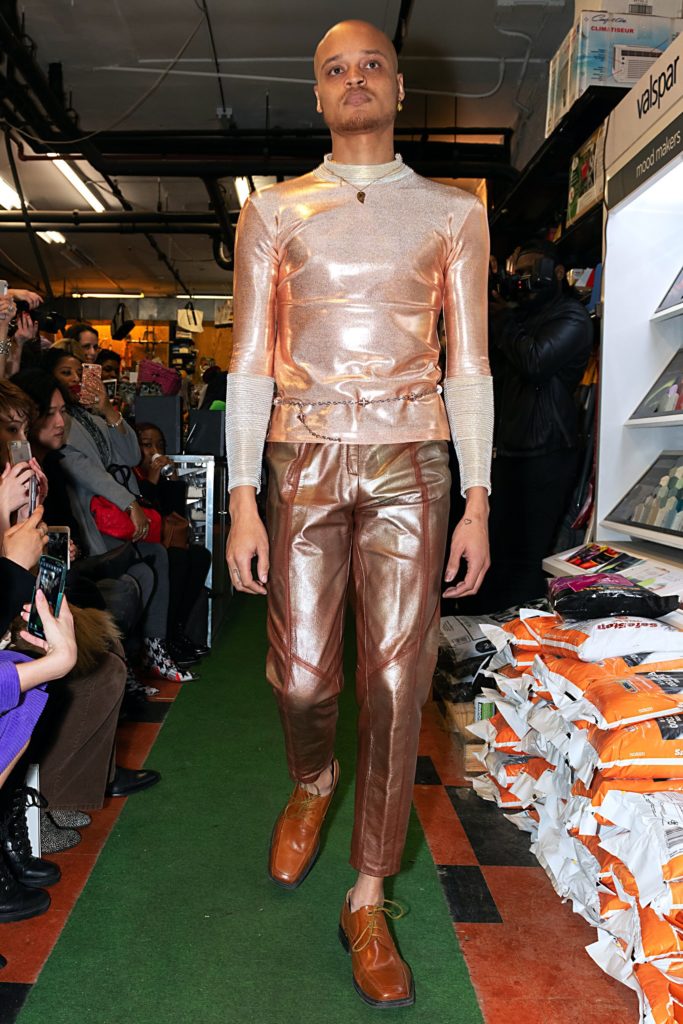 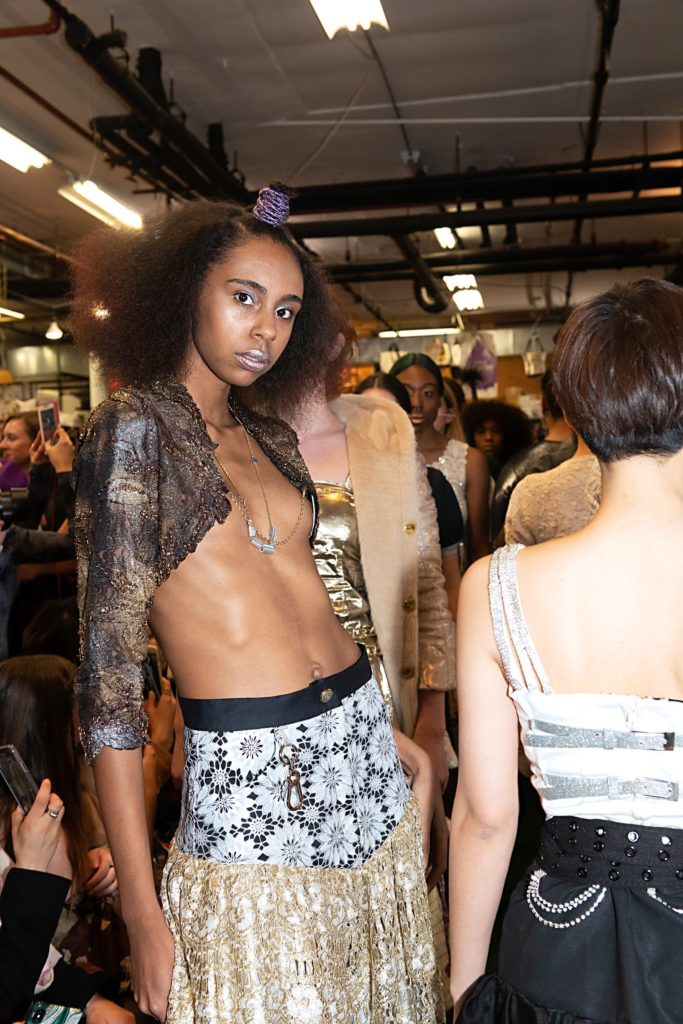 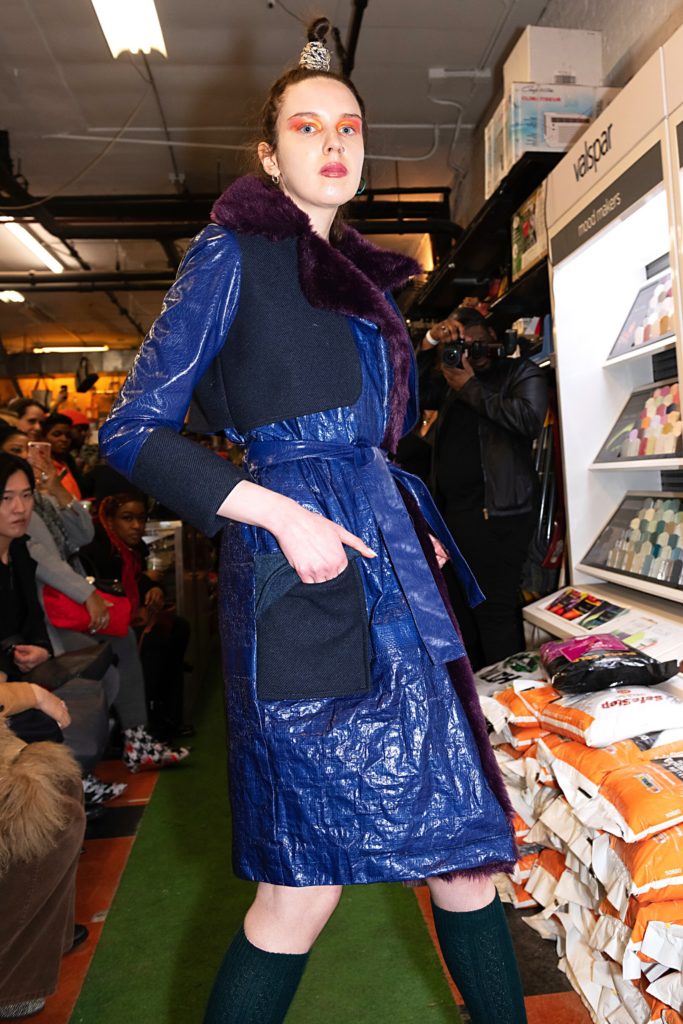 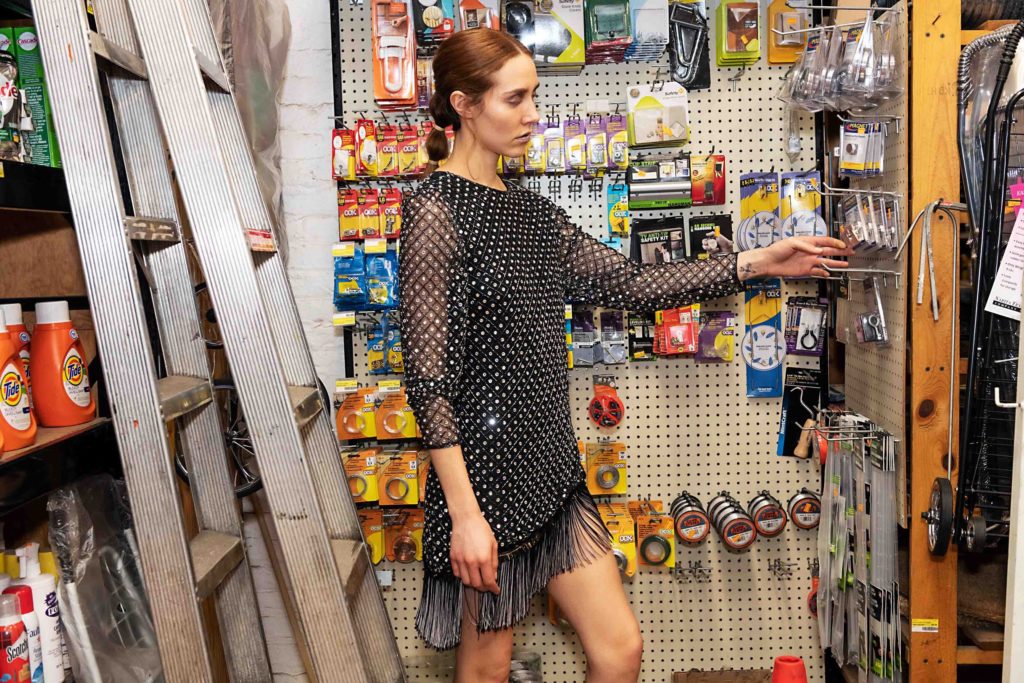 One thought on “Industrial Evolution: Amanda Mehl at NYFW19”