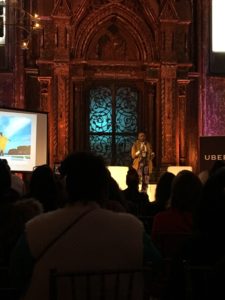 A new, one-of-a-kind collective arts gallery in Chelsea brings together performance art, music, fashion and visual art to excite all elements of your sensational curiosity.  This sweetest specimen of sequins, graffiti and grit, 3-Squared is taking the NYC art world on edge, one ‘Apocalyptic’ event at a Fashionista’s-Den time. M= Marina Dojchinov/ A=Akaash Mehta     […]