“There are so many cosmic themes in the etymology of her name, it is as though she was born to paint this way”  – Ellie Jahrling

Representing about 12 artists on exclusive terms, Max Laniado gallery hosts Cosmina’s second solo exhibit (after 100 solo exhibitions in Europe) “The External Facets of the Inner Self”. An unclassifiable, distinguished painter, she masters tactility and dimension using oil—a durable and aesthetically pleasing medium used by European painters for centuries. Employing a dot and line technique, Cosmina minimalizes abstract painting to the extreme. Superimposing many layers of colors, over and over and tons of little dots into an ‘organized random’, she uses different tools to control the shape and intensity. She calls this “controlled serendipitous painting.”  It is, heretofore, through Max Laniado’s best-selling artist that one comes to learn the value of meditation.

Accessing the recesses of human nature, her works trigger sensation, memory, and affinity; her work is very meditative, and is something different each time. I can revel in it, because it is so mesmerizing. She is neither flamboyant nor replaceable.   –Laniado

Born in Romania, Cosmina’s family fled the Ceausescu regime and settled in France. Having obtained a degree in Japanese language and culture, she studied Chinese painting, Japanese calligraphy and thrives on yin/yang—light/dark dichotomies. Fascinated with the interpenetration of opposites—crucial to achieving Taoist harmony—reaches into her controlled blasts of textured color. She was inspired by Wassily Kandinsky and Paul Klee’s writings on the philosophy of colors and shapes—on their interactions within a painting. 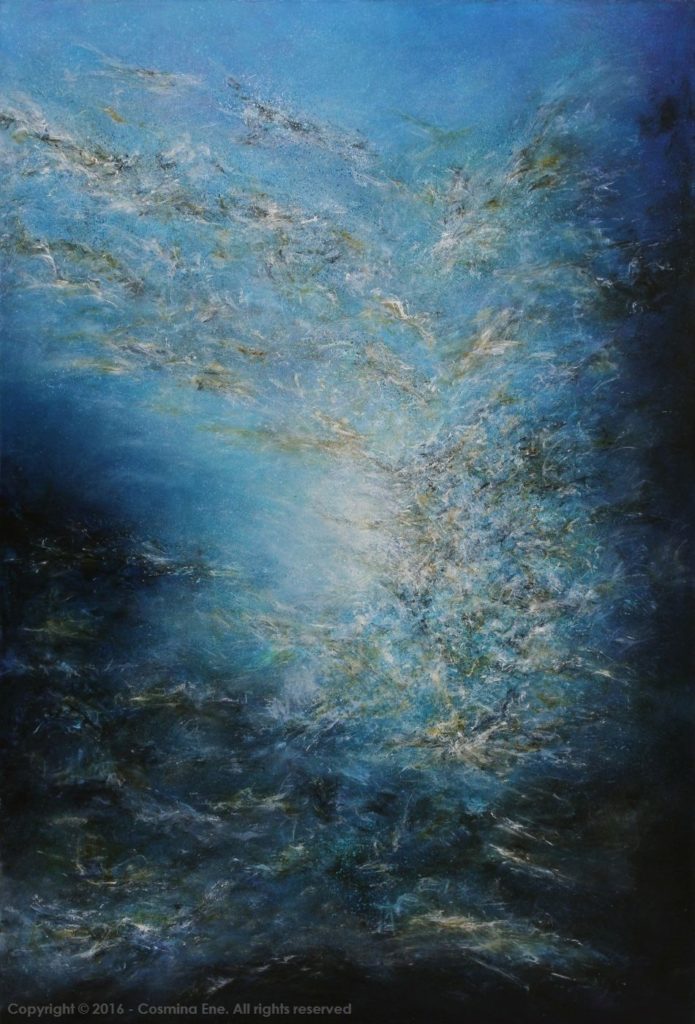 Valuing the emotional effects that arise from pictorializing the absence of an object, Cosmina launches viewers into philosophical journeys of meditation and cosmic reflection. She adopts Jackson Pollock’s drip-painting technique, as a way of dislodging deeper emotions from within. Spontaneous specks of paint, handled with finger, brushes, dots and tools, epitomize the unpredictability of the world; they hypnotically iterate the complexity of human nature. Her generously tactile and rich paintings illuminate the inner self, hence her titular “Lights of Hope” exhibit (2014-15). 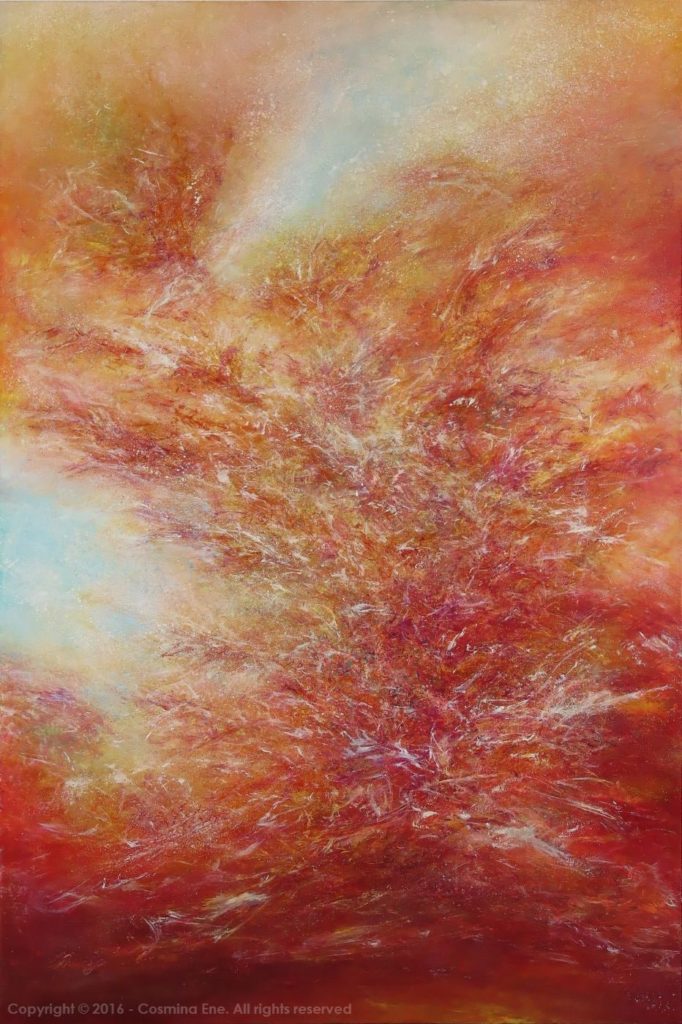 Cosmina leaves no part of the white canvas unhandled. She spends months on a single painting, and produces 12 works—annually. Creating her colors from pigments herself, they are sensational, dynamic and far-reaching.

“In the beginning, she was different; she did portraiture and figurations of the natural world. Her first abstract painting, ‘Aquatic Yin Yang’ was what made me decide to show her.

Another tryptic was all about representing all the light of one day at once, meanwhile her collection ‘Temporal Vibrations’ represented time in abstract painting. “She has started to be recognized in Europe for her ability to provoke, hypnotize and inspire, and has certainly progressed over the years,” Max Laniado recalls:

“Now—Cosmina is everything but figurative. She generates real abstraction, and that’s the biggest challenge: Translating emotions, meditations and philosophical ideas into abstraction.”

Laniado believes the way of promoting artists is to represent them from the very beginning—and to drive them to the highest possible level. “For that, you need very unique levels who can stand to be represented and shown.” 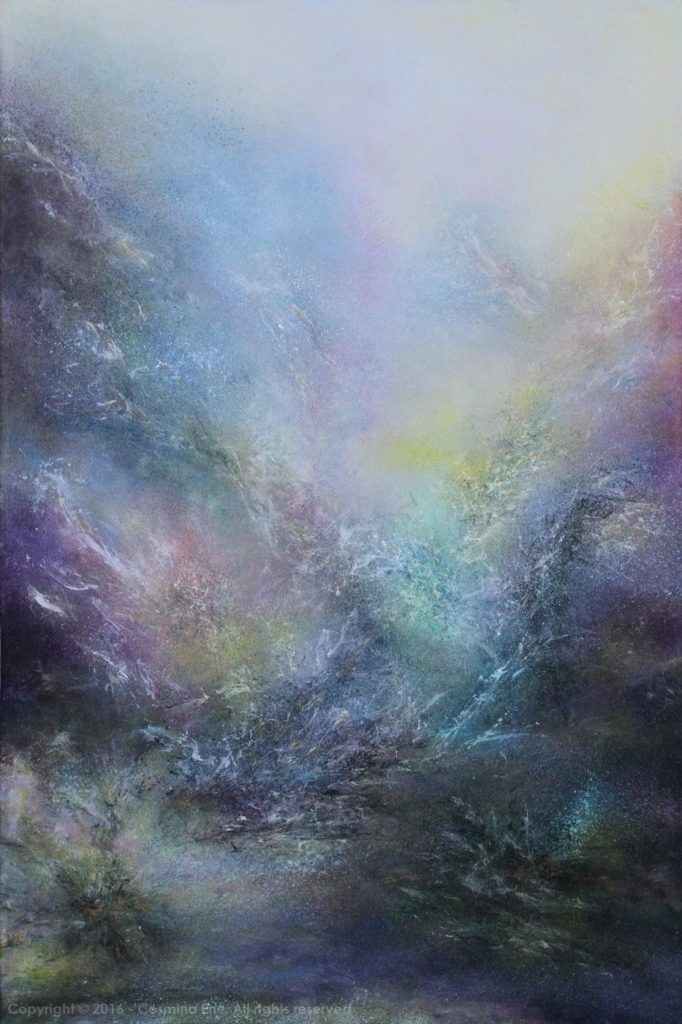 When you are in the art trade, you have different trades. Certain art traders tend to want to represent famous, well-known artists, only. Then you have the galleries who show one artist one month, and then another the next month. “This is why so many artists hop from one gallery to another,” Laniado asserts. He references Fontana, the artist who became famous for slashing the canvas and painting it all red: ‘He was the first to do that, is known and is expensive because of it.’ Cosmina’s paintings are too, now expensive, because she constantly evolves. ‘What’s extraordinary with Cosmina, is if I show you one panting, you will immediately say it is Cosmina. No doubt. Once you know her work, she has such a strong identity that you will know it is her.’

Max also ‘discovered’ her brother Ene. He goes by their last name Cosmina gracefully abandons. His work is about the artificial boundaries and finites superimposed onto the environment and the process of bursting forth and breaking free from into whatever is beyond them—and in other cases, not breaking free, but upgrading from them. He uses an architectural pen. Meanwhile, his sister works in a studio in Long Island City, on the floor. She loves music, but woks in absolute silence, so not be disturbed by the noises around. Inducing meditative, immersive states is after all– her goal.

“When I discovered them they were unknown. Every 18 months, we allow them a solo show, with group exhibitions in between. I am very critical, but will not settle for second best.” M.L. 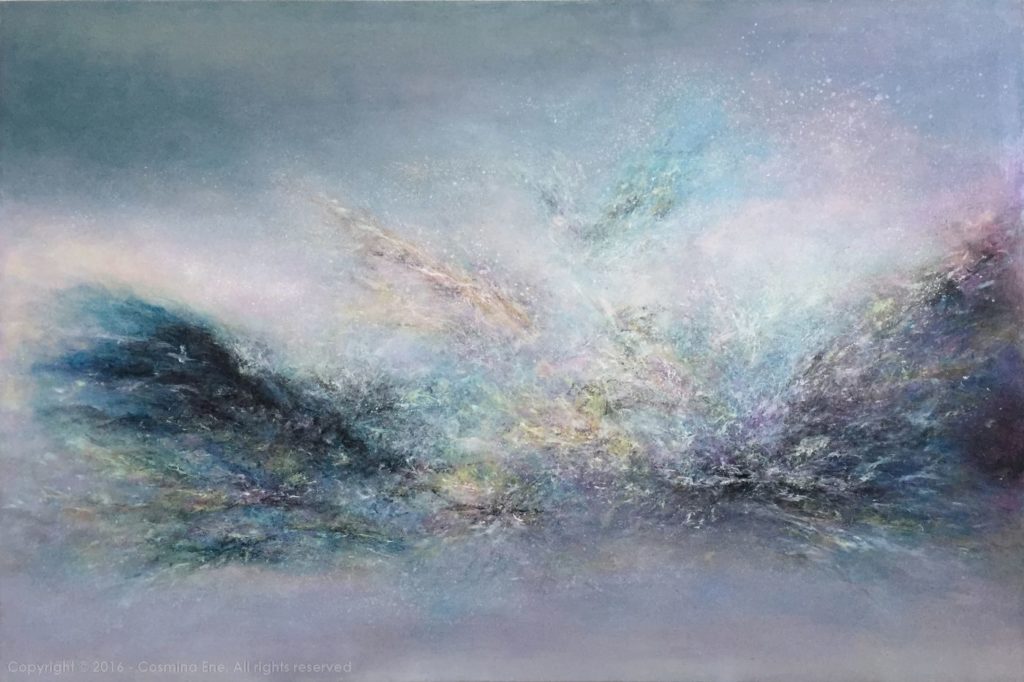 Celebrating the launch of Kenneth Cole fragrances For Him and For Her at the Bond street location Tuesday night, Beauty Editors, Fragrance Compounders, Skin-Care advisors and fashionistas alike coalesced. Partaking in the mosaic of libations, fragrance bar, vivacious candies and artisanal bites, thematically curated to reflect the titular new blends—Serenity, Energy and Intensity—these new scents […]