“SHE IS” is an art show featuring 20 female visionaries. Their profound experiences do not shy away from expressing themselves through mixed media, sculpture, print and canvas. Curated by Marina Dojchinov, the goddess whose expertise spans the spokes of the ultimate culture fractal—One Art Space has the privilege of being blessed by incredible women. Nestled warmly in south Tribeca, amid the #metoo movement, “SHE IS” urges us to recognize that women are powerful, all-inclusive fractals; transcending racial, religious, political boundaries, females love, embody and receive flowers for a reason.

Allowing myself to freely meander and stumble into serendipity, I had the privilege of speaking with some of the goddesses in participation. Requesting that bystanders point out their favorite few pieces, I gravitated toward the back wall, where lay two starkly contrasting works. 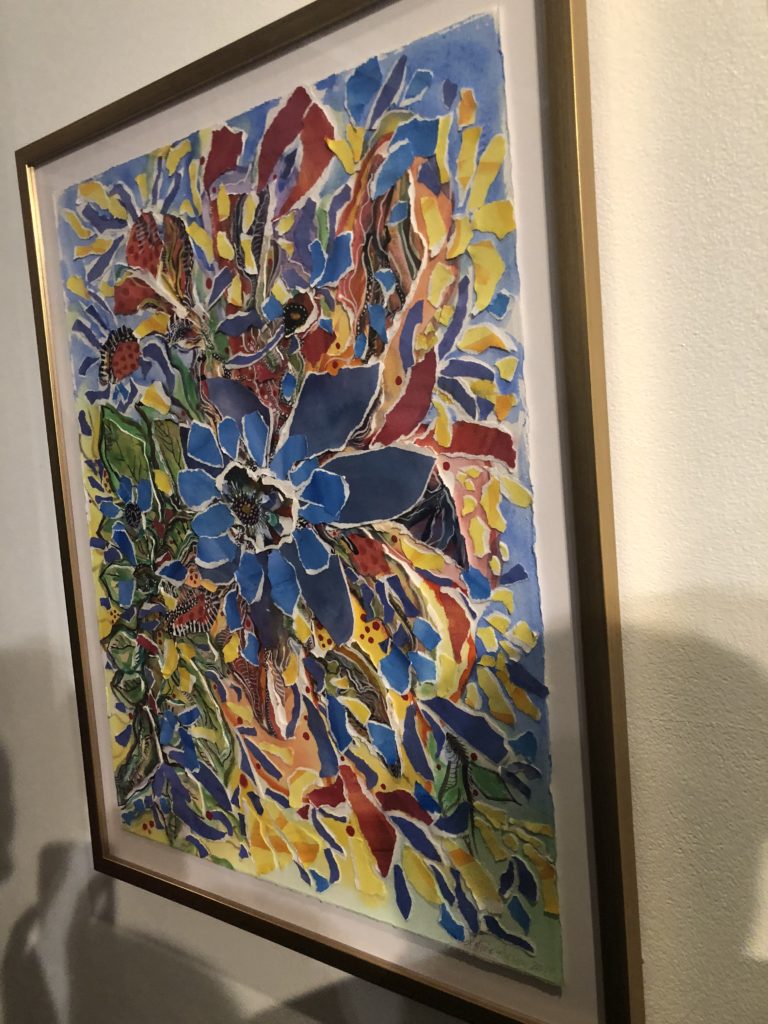 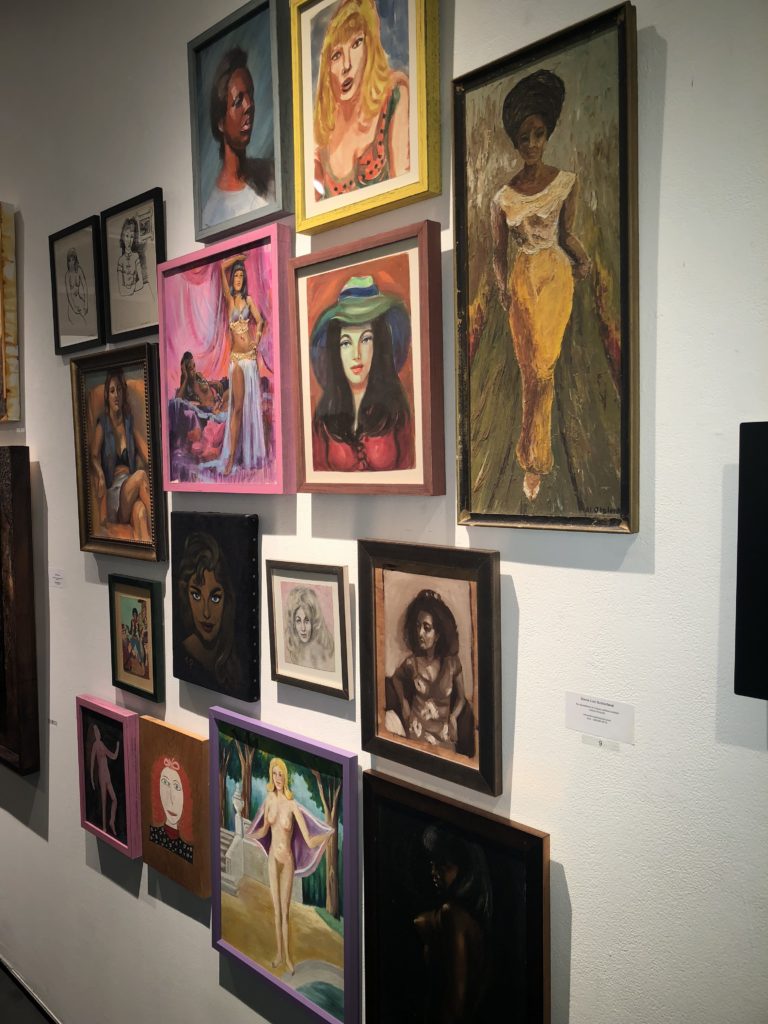 First, was Allison Harrnell’s iridescent photographic print, digitally explored to have new meanings: “It’s actually very purposefully refractive”, notes the artist, whose other works are all reflective on purpose. A commentary on shifting perspectives and the viewer’s gaze, Harrell notes:

“As you move around, your relationship and angles to it change—as do the highlights, colors and shadows. It really puts the unique experience in the hands of the viewer.” 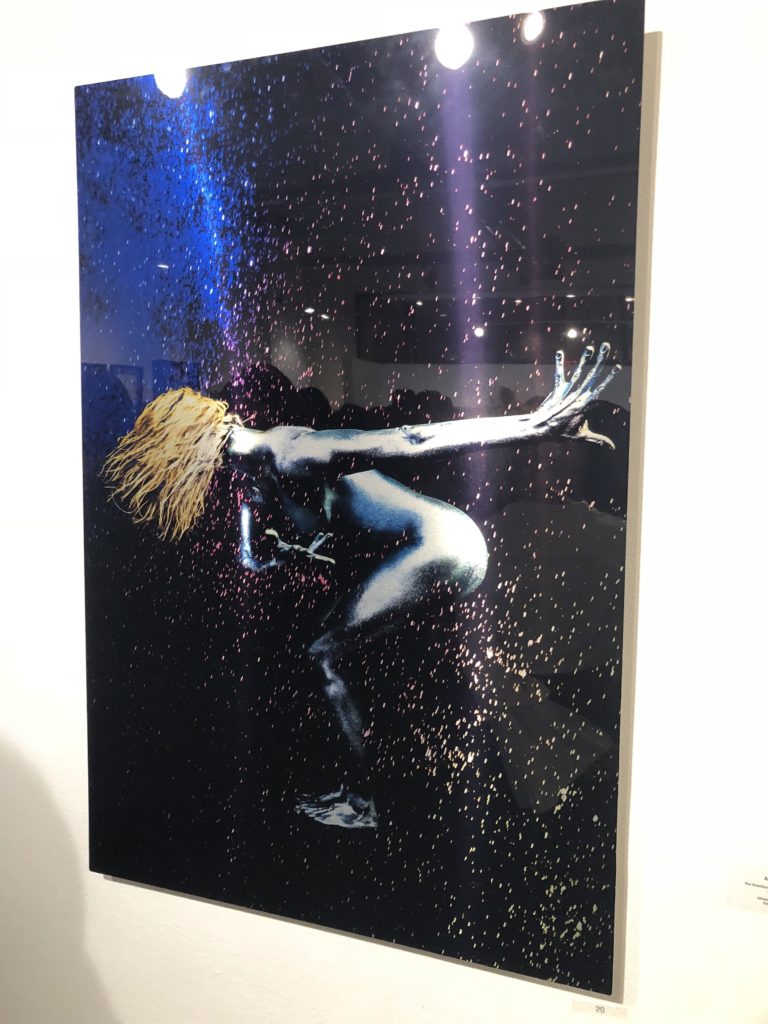 Showcasing her best friend since 11, “it is in a way retrospective, future-hope kind of piece featuring beauty, via a gorgeous women with a lot of power. Strength is beauty, especially amid a celebration of color, and so the sky is a photographic shot of the Milky Way, as seen in Bahia, Brazil on a winter night ‘in the radically open sky’:

“It seemed like the perfect place for her to stand and shoot this power out of her form, among the stars.”

Shooting in ‘a specific contrast-way,’ Harrell applies algorithm math in blending the two images. “It’s about taking advantage of an algorithmic change that happens between things”. Astronomy, nature and friendship, heretofore, meet under a single umbrella that mesmerized many fractal-eyes this eve. 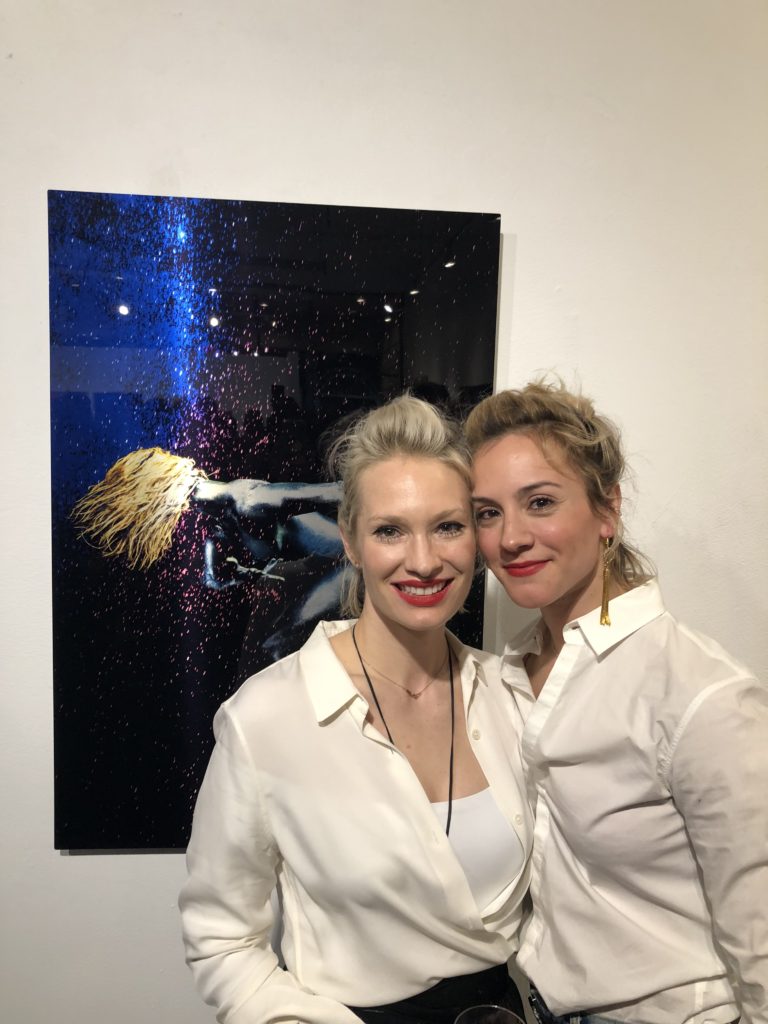 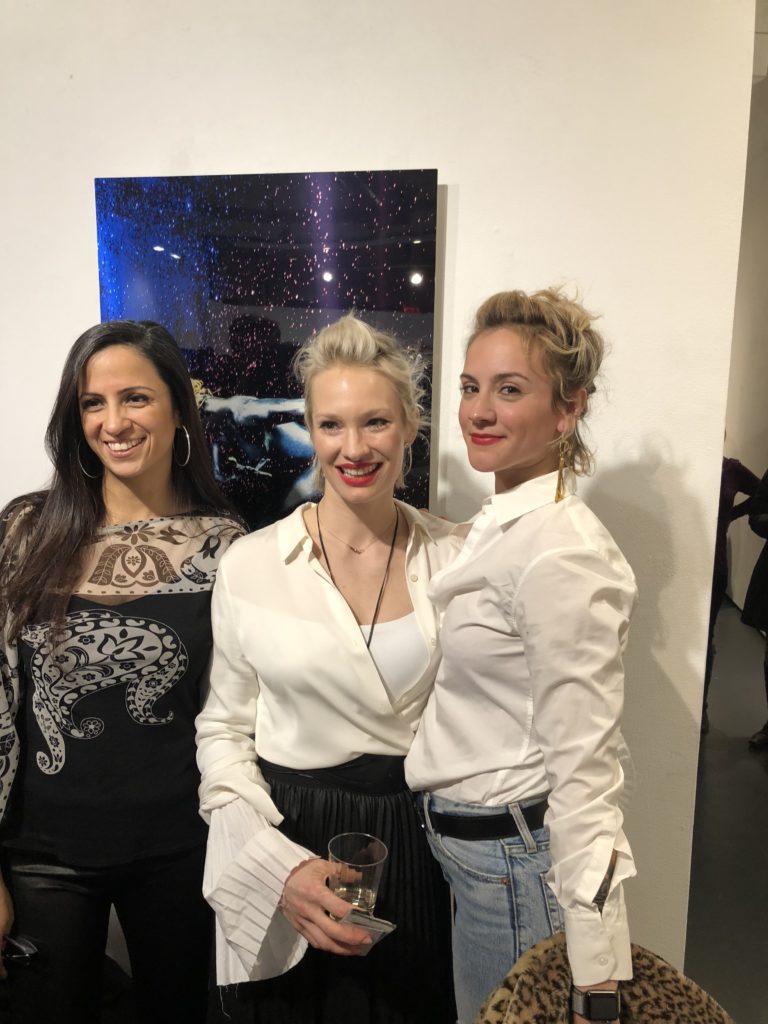 In stark yet complementary juxtaposition lay Miroslava Romanov’s 36” x 36” large rendering of “Ophelia”. Characterized by a raven-haired hawk-ita, emboldened to tread nude and free atop watery ribbons of sapphire, white clouds acropolis above her navel, hereby, supplying sight and savor. “I feel it’s more about her soul feeling the greatest freedom,” notes the artist.

“I aim to show how you can feel like yourself in harmony in the open space without any limits or fears… All my art is Erotica. I do what I feel, and most my works are based on the human body, but it’s about something deeper.”

Representing total harmony and relaxation, Miroslava’s piece resonated with many, who I wish could’ve been blessed with the opportunity to actually meet her. 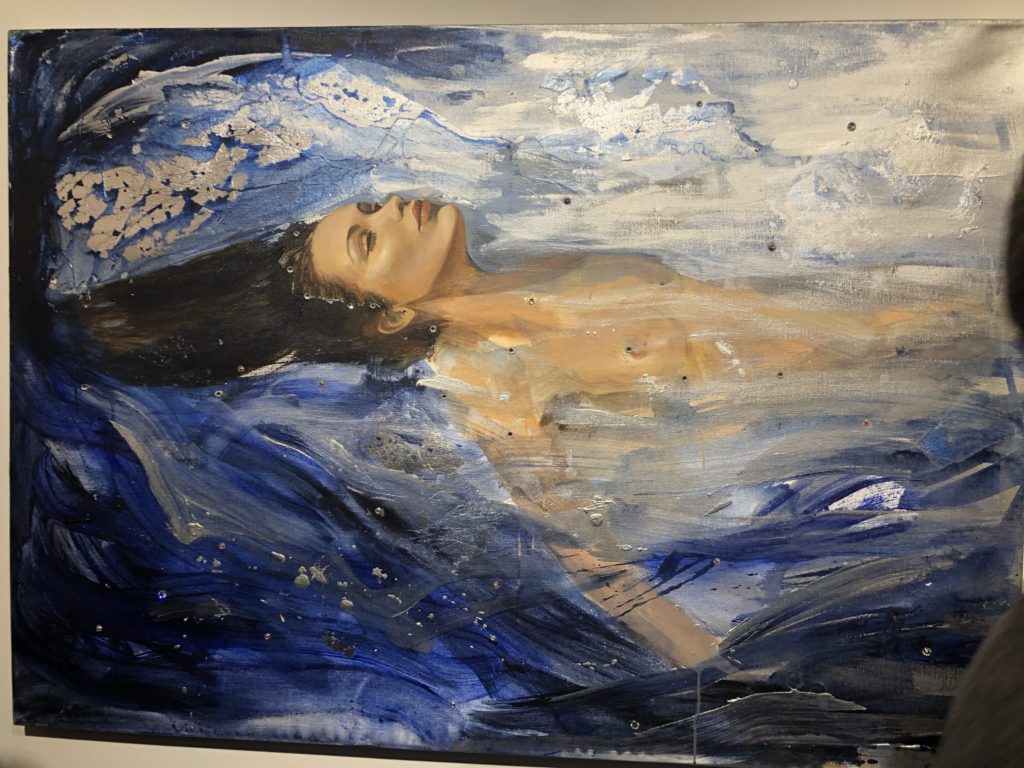 Lastly, I gravitated toward a best-dressed Debbie Dickinson—an articulate powerhouse, imploding fractal with every angle of expertise. Supporting artists for the last 8 years, she not only drew in a handful of the ladies featured. But she is now working on showcasing an infrared art photography exhibit, for Leonard Torne gallery.  Exhibiting her three limited edition C-prints, the triad is a product of a decision to ‘throw the towel in the ring’ and to make something from the 15,000 photos stored on her phone last year; having curated 14 shows, the following three cap her spiritual response: 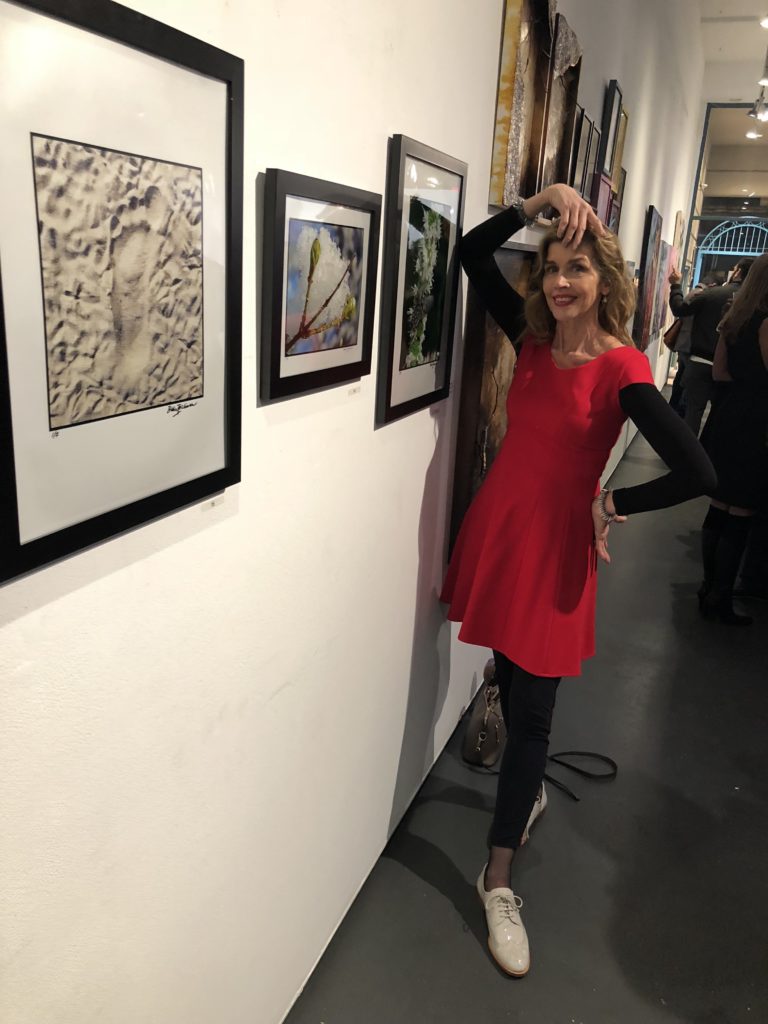 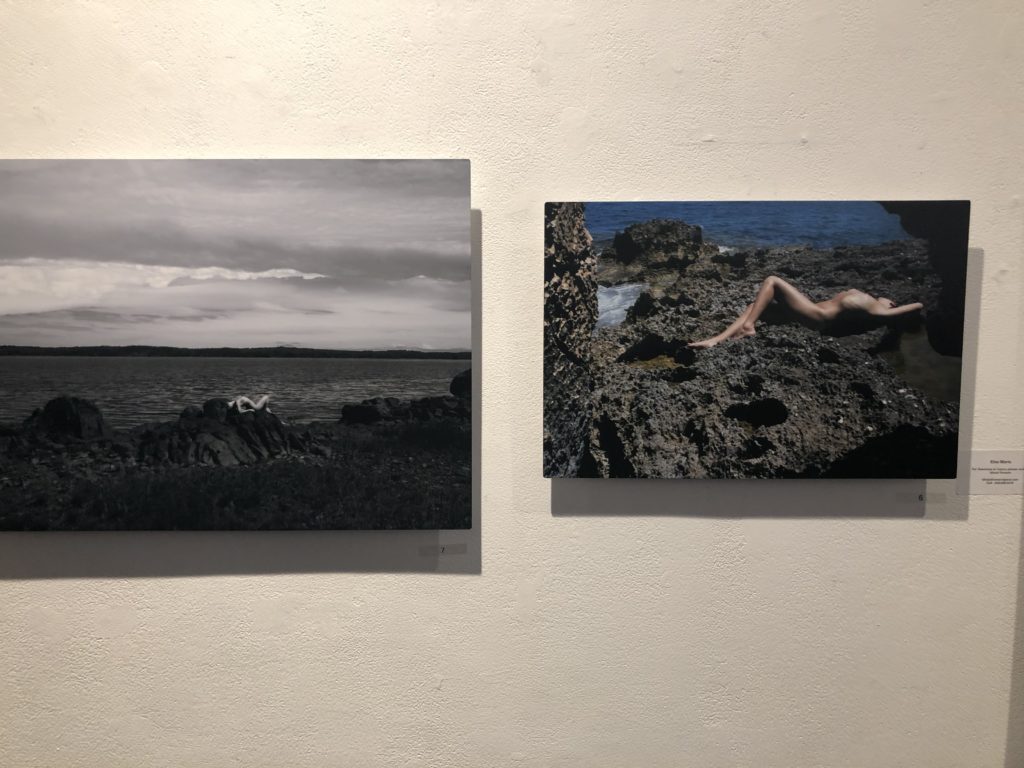 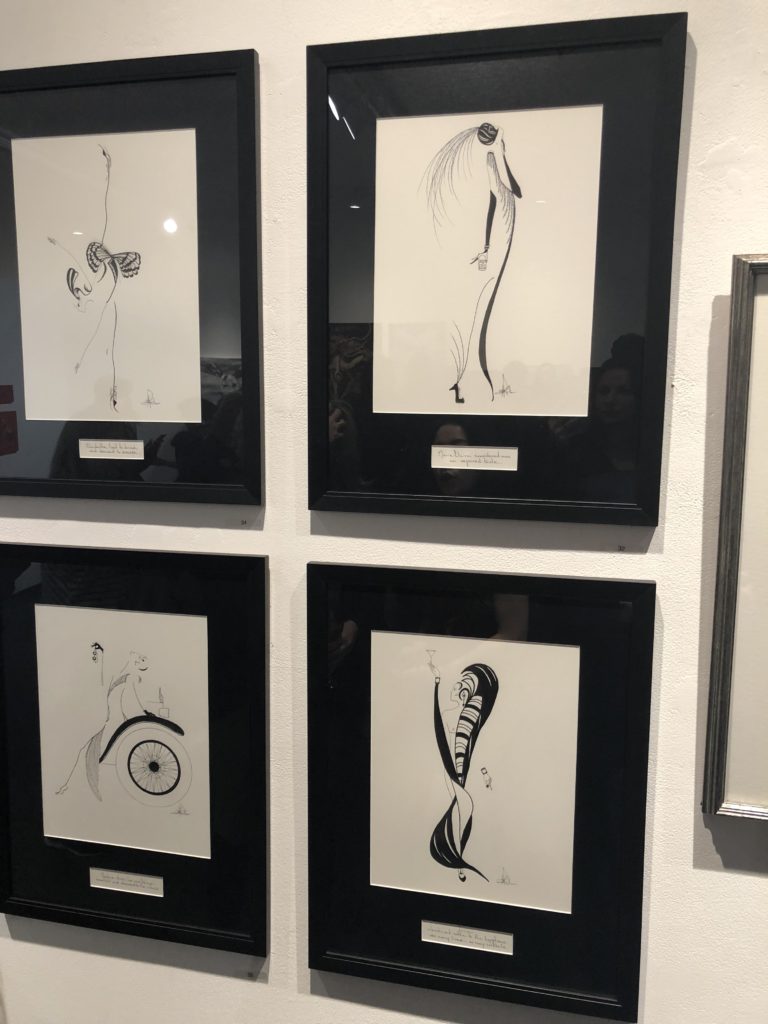 Introducing me to a few other ladies’ commentaries on shyness, success and perspective, Dickinson generously imparted insight into three more female artists. First, “A Fox in Central Park” is a shy Katerina’s playful enactment of female nudity. Sticking her middle finger up next to a fox in central park, the artist photographed her naked friend in central park, and then repainted it. Meanwhile, Echo Shi Volla depicts three Chinese girl students singing in class in oil on canvas. Having quit painting to nurture her singing, Echo is now a highly accomplished soprano living in Brittney, preparing for production in classical music. It is beautifully ironic that the singers look like they’re echoing the artist, herself. 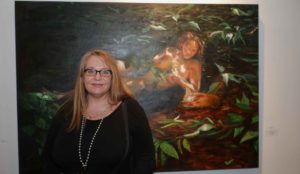 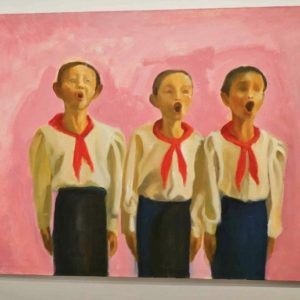 Finally, Soheir Khashoggi, an Egyptian bestselling novelist enacts the ‘essence of her joy’ through still life and portrait. “If you notice carefully, you can touch the architecture—the wood that has been ‘perfectly’ pasted on”, says Debbie, who’s known the sister of Adnan Khashoggi—international business entrepreneur—for 40 years. 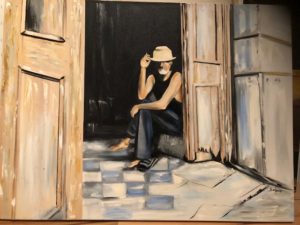 In conclusion, SHE IS activates a plethora of sentiments; confronting fears. It wipes the tears transformed into sparkle by viewers’ gaze. The mantra “I am woman hear me roar” hereby awakens and fractyllizes 20 women’s stories and histories, as the world is left to revel in the glories formerly unbeknownst. 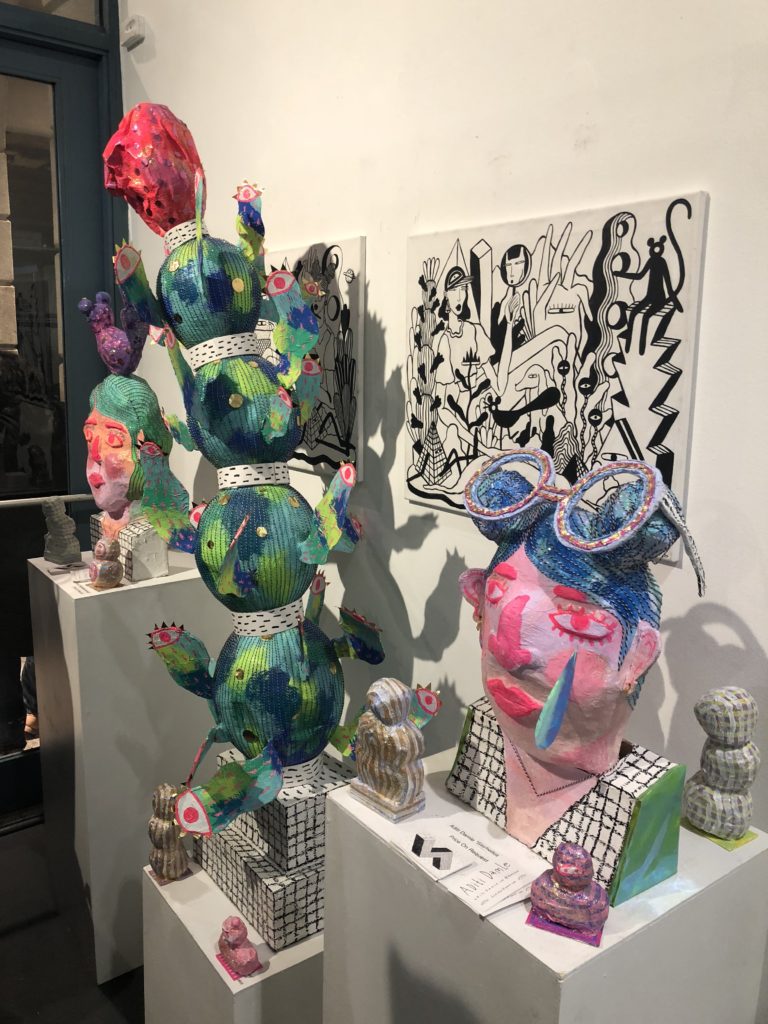